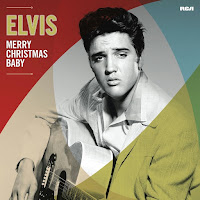 With the Holidays upon us once again we have an opportunity to hear some new music and old standards. And some artists should never give it a thought to release an album of Christmas songs. It reminds me of the year the Metal God Rob Halford released one just because he always wanted to. The results were horrific, it probably should have been released as a Halloween joke to all metal heads. At this point I regress...

Well there are artists, or legends I should say, that have some great recordings that they have released over their long and productive careers, and in this case, we are talking about the iconic Elvis Presley.

RCA/Legacy dug into the archives to release a special Record Store Day limited edition of Merry Christmas Baby in random red and green vinyl. Mine came in green and it is beautiful vinyl with fantastic music and select tracks from the king.

Vinyl is growing exponentially, and along with that, record players have come into vogue once again. Also, stores like Newbury Comics who used to carry thousands of CDs, has pulled them out of their stores and replaced them with vinyl and other swag and memorabilia. I was shocked to see this happen but it makes sense on a business level - you must stock what sells. If I want a CD I get it on eBay, it’s as simple as that.

So, the state of music today has many variables however availability for special issue vinyl LPs and the demand for them has soared. I am thankful for that. What I have found interesting is that all along I thought the sound of CDs was as good as it would ever get, I was wrong. I hear things on vinyl now I never would have noticed before on a CD.

You get 17 tracks, which is a handful for a standard LP and each one stands on its own as Elvis at his best. The best thing about this release besides the color and format is the fact that the king covers some holiday classics infused with some heavy blues influence. It’s not the sugar and spice and everything nice kiddy stuff that you hear blaring at Wal Mart this time of year, oh no.  This is flat out rockin’ blues based music adapted to Christmas classics. At one point Elvis hollers out “Play it Scotty,” calling out his guitar man Scotty Moore to cut loose.

I don’t think music fans or Elvis fans could ask for more this Holiday season. You get the King getting down and dirty with a crackerjack band and his voice is full of emotion and grit. I enjoyed this LP immensely and plan to make it a yearly spin this time of year from this day forward.