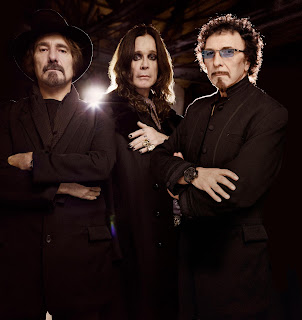 I thought I would never have the opportunity to see Black Sabbath live and it was likely they would never get back together to record again. Well I was wrong as both events happened and I can now check off another bucket list group. The improbable happened once again. What a great show I witnessed last evening at the Mohegan Sun. It is quite a facility and walking through the casino was very entertaining. It is like a little city contained in one building. It is very impressive. 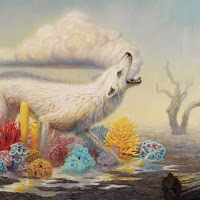 I was very familiar with the opening band Rival Sons.  I have most of their music and they have amassed quite an impressive catalog I must say. Their most recent release is Hollow Bones which is excellent and it has some amazing artwork on the cover.

I find their music an energetic and moving type of blues rock and on some their tracks they sound like they stepped out of the 60s. They are different and original and that is what attracted me to their sound right from the start.

The lead vocalist is Jay Buchannan and good lord does the man have a set of pipes. I would recommend checking out all of their music and make sure you get to the Sabbath show early enough to catch them live. A lot of the crowd showed up when Sabbath came on and I had though the house would have been packed right from the start but it took a while. 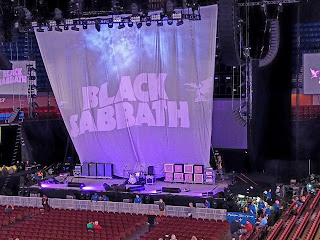 After a break Black Sabbath came on stage. The huge white sheet with Black Sabbath emblazoned across it that was covering them dropped and then we were off!


Most appropriately they opened up with “Black Sabbath.” Ozzy sounded pretty good and the band was very tight. I felt a chill come over me with the realization I was living out another lifetime dream.

Wakeman was in a little tent off to the side of the stage and Clufetos was very prominently displaying his talents all night long including a phenomenal drum solo after the instrumental “Rat Salad” (Paranoid album).

Ozzy was a hit or miss all night with his vocals. It seemed some songs were spot on and others he was a bit off. “Snowblind” (Volume 4 album) was amazing. And “War Pigs” was great as well as the entire capacity crowd joined in. Ozzy was very animated and mobile, always urging the crowd to clap their hands and get into the flow of the music. “Hand of Doom” was also excellent. I was surprised that there was no coverage from their album 13 at all. That didn’t seem to bother the audience at all though, they loved every minute of what they were getting and so did I. I have to give the nod to the special effects backdrop as well it was very colorful and entertaining with a lot of close up shots of the band members, especially Geezer’s rapidly moving fingers on his bass!

During “Dirty Women” (Technical Ecstasy Album) the sound crew turned up Tony’s guitar so loud Ozzy could not hear himself singing and we could not even hear the drummer. I can see putting the spotlight on the lead guitar man but not at the expense of the rest of the band. That was the latter half of the show but very noticeable. Ozzy was relaying hand signals to let them know as well. 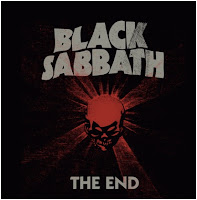 I picked up a tour shirt and special CD release that is only available at the concert with eight previously unreleased tracks. Four of the tracks never made it on to the last studio album and the other four are live recordings. I thought it was a bit pricey at $30, I think $20 would have been more reasonable but I got it anyway, it was a one shot deal and I would have regretted not getting it. I am all for supporting touring bands as it is more difficult to sell music in this day and age.

I am happy Tony Iommi is in remission of his cancer and he is here to bring the Black Sabbath legendary sound to life on stage for us. They ARE the godfathers of heavy metal without question and everyone else comes in second.

This is a great show that should not be missed! Once it’s over it really is The End for Black Sabbath, or so they say….