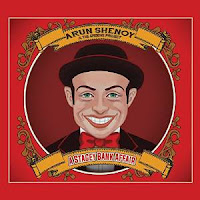 Arun Shenoy & The Groove Project  released A Stagey Bank Affair a little over a month ago. This is the kind of instrumental music that I absolutely love and for many reasons. The energized combination of jazz, rock and fusion is delightful and done very well. This is Arun’s first album in four years since his acclaimed debut Rumbadoodle which was given 5/5 stars from our staff at the time. I have a feeling history may be repeating itself. The title of the recording is a reference to carnivals and the cover a tribute to the long lost art of carnival posters.

This was a learning experience once I took a look at Arun’s website to find out more about him and his music. According to the artist website here is an explanation of what kind of music this is:  Bansuri Funk is a sound stylized by the fusion of Funk, Jazz and Rock with a spicy hint of Worldly Pleasures, the latter being a reference to the blazing performance on the traditional Bansuri by acclaimed flautist Ravichandra Kulur.

The first track “Sugar Free” sets the carnival ride into motion with some brass, keyboards and stinging guitar lines. It is a great way to start the show and worth every penny of the admission price to get in the door. The music entices your soul to dance and your heart to sing and the musicianship is to die for, there is no other way to put it.

The title track kicks things into high gear with good dose of funky guitar for openers. And the melt like butter keys introduce some great saxophone followed by a killer guitar solo. The bass gets real funked up as well; it keeps the groove in line as the rest of the instruments join the party. It reminded me of when I was just getting into jazz heavily in the 80s listening to The Yellowjackets, Tom Scott and David Sanborn etc.

This entire album is like an invitation to the merry go round of life we call emotions and rolling with the tides of change. The music follows a similar course offering the listener an eclectic yet precise representation of jazz rock fusion with worldly flavors. It is like a double shot of espresso with the right amount of cream and sugar in the mix, not too biter and not too sweet, but just right, strong enough to leave a lasting impression and get back in line for that second cup.

There is so much good music on the recording that it’s hard to talk about it with so much going on in each song. “Sad Clown” is another highlight featuring the keyboards and the kind of music that could turn that frown upside down. There is some melancholy with the orchestration and the normally biting guitar toned down and tastefully done to reflect the pure emotion and mood of sadness as well as some appropriate violin towards the end of the song for extra measure. However again Arun and the band are able to lift the spirits to another level, take sadness for what it is worth, and move on.

This is very descriptive music for all instrumental music and for those who appreciate jazz, world and some rock thrown into the mix making it a more uplifting experience and great listen. This band can rip and rock when it wants to then take the softer textures and tones and mix them in for the right measure of each component to make each track a complete musical adventure, or that one ride at the carnival you will never forget.