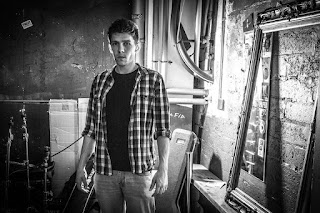 “Raving Wild has all the seriousness of good indie folk music but is very pop-alt relevant!”
-Jamsphere-

Raving Wild is set to release contemplative indie EP ‘Kolmanskop’, a cathartic project that deals with life lessons learned from past mistakes.

Having appeared on Tom Robinson’s BBC 6 show and BBC Introducing Three Counties amongst others, Raving Wild is one of the most intriguing and riveting singer songwriters on the indie scene at the moment. Signed to Coffee Jingle Records, the musician has earned praises from media platforms such as The National Student declaring that Raving Wild aka. Graham Iddon is “crafting a sound that is delicate yet powerful, embedding subtle instrumental intricacies within hook-heavy ballads.”  Other people who complimented his music include Liz Mitchell of Boney M.

With a touch of Jeff Buckley and City and Colour, the EP and eponymous single ‘Kolmanskop’ is an ode to an abandoned mining town in the Namib desert which Raving Wild used as a symbol for the EP’s concept “Lessons learned in the desert”, an inspiration that derived from a soul searching mission in which the artist wanted to understand how he could learn from past mistakes and understand the world around him better. The lead single, ‘At The Crossroads’, sets the perfect mood for the life journey that the singer describes in the record.

Check out ‘At The Crossroads’ here:

Having lived in a miner’s town himself during his early childhood years (albeit not in the desert but in the North East of England), Raving Wild has managed to mix concept with personal experience. To make the recording process as authentic and ‘desert-like’ as possible, the singer dehydrated himself 24 hours prior to the making of ‘Kolmanskop’. He also explains: “This is, to my knowledge, the only track in the world where a pickaxe makes part of the percussion.”

Raving Wild has recently had the opportunity of playing at the film set of the latest Star Wars movie at the prestigious Pinewood Studios in London as well as in front of a couple of thousand people at Parklife Festival in Aylesbury last year.
Apart from being a talented songwriter and lyricist, Raving Wild’s interests range from attempting to break the record in the land speed of an office chair or eating a tin of hot dogs in the fastest time possible. He’s managed eight in 16 seconds which means he did not break the record.

We might not read about Raving Wild in the Guinness Book of Records, but it is more than likely that he will gain growing attention for his music in the world’s entertainment sections.