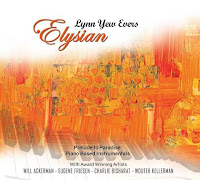 A Global Music Awards winner and professional musician, Lynn Yew Evers is an accomplished artist of international renown. Primarily performing in the US and Malaysia, she has worked closely with Will Ackerman at the renowned Imaginary Roads Studio in Vermont. Her third album, Elysian is a beautiful addition to her musical repertoire, focusing on classical sounds as reflected in nature, sometimes with a splash of contemporary improvisation. Contributing artists to this album include Will Ackerman, Eugene Friesen, Charlie Bisharat and Wouter Kellerman, many of which may be familiar to fans of classical and New Age music.

The album begins with a piece called "As the Train Leaves." It is a piece of observation. Of hurrying to the train station, boarding and watching as it follows along the tracks to the verdant countryside. Leaves of green and trees burst forth, spreading their arms to the sky, joyous for the sun that shines down upon them. We watch the people around us, busy in their lives and wonder about them, even as our eyes are drawn once again outward to nature in its majesty. Each note, each melody reflects the glorious hues shining under the big sky and we are but a small piece of the puzzle.

"Dream Chaser" is just that. It is the edgy moment just before you fall asleep, teetering down the precipice of your most ardent wants and hidden cravings. Sometimes pale and timid, with notes that drift ghost like and others more intentional, this solo piano piece encompasses the innermost melodies of the heart, spun inside our dreams. Graceful as a ballerina, this track shimmers and glides through the human condition in all of its foibles. Waking and sleeping, dreams are what we make of them but if we learn to listen, we might just find the right path to our heart's deepest wish.

"Night Owl, In a Style of a Nocturne" was a riveting performance. String meets whispery vocals and classical style piano made contemporary. His arms grasp your shoulders, swinging you out from the busy ballroom, out into the night. The pulse of your blood in your veins sings sweetly as he spins you around the balcony, lost in a music all your own. Sweet, sultry and mesmerizing, this piece struck me from the very first note. The multi-instrumentation and breathy female sighs were a romance reader's soundtrack, if ever I heard one. At times sedate and other, the piece peaked to a frenzy indicative of forbidden passion and the longings of things that may never be. Astounding and marvelous, this tender and complex composition won my heart and I can't stop playing it.

Lynn Yew Evers is a talented artist, teacher, musician, solo pianist, performer and more. She began her path to musical proficiency at a mere four years old and since then has never wavered in her conviction and love of the craft. Will Ackerman has said that Lynn "has the heart of a romantic and the hands of an artist." Each song is an illustration of that very truth. She has performed for the king and queen of Malaysia and has the ability to take everyday sights and sounds and artfully arrange them in a garden of fresh musical interpretation. I highly recommend this album to anyone who has a love for solo piano and music that takes you away.

Key Tracks: Stars As the Train Leaves, Dream Chaser, Night Owl in a Style of a Nocturne