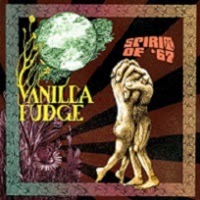 Known for their rock renderings of popular songs and for being psychedelic rock maestros extraordinaire, Vanilla Fudge are still going strong some fifty years on.  Original members Mark Stein (vocals, keyboards), Vince Martell (guitars), and Carmine Appice (drums) are joined by Pete Bremy (bass) on their new album, Spirit of ’67.  Spirit of ’67 is just like it sounds, as Vanilla Fudge give their own take on some of the most popular and iconic songs from that year.  Featuring songs made famous by The Doors, Marvin Gaye, The Who, and more, Spirit of ’67 is one wild and heavy ride through some remarkable songs from one of music’s most influential times.

The first musical treat on an album chock full of them is “I Heard It Through the Grapevine.” Made famous by Marvin Gaye, Vanilla Fudge has put a nice psychedelic/blues rock spin on this classic song.  I really dig the organ based sound running throughout the song, and there is a short and sweet guitar solo in there for good measure.   Showing off a more hard rock sound, “The Letter” lures you with the solemn atmosphere created by the opening piano section.  It makes for a powerful and an emotional start, but the song really gets going when the drums kick in and it is off to the races from there.  With psychedelic rock sound, “I Can See for Miles” has nice hopeful air to it. The drums boom, the keyboards are phenomenal, and the guitars are killer, as they all lead to a magnificent climax.

Vanilla Fudge’s rendition of “Break on Through (To the Other Side)” is still pretty solid.  Some might like the tempo change, and I have to admit that this version is still pretty rocking. At the end of the day, I still prefer The Doors’ version, but it is definitely the type of song that has grown on me the more that I listen to it.  “The Tracks of My Tears” comes out crushing it before transiting to a more serene sound.  “I’m a Believer” is a pretty sweet hard rock rendition of a classic pop rock song.  “Gimme Some Lovin” is the real standout song on this album.  It is nothing short of great.  It has a great attitude, nice tempo, and the guitar just completely steals the show near the end of the song.
Nearing the end, the album keeps on going strong. “For What It’s Worth” is a rendition with a lot of power and energy behind it, making it one of the more memorable songs on the album.  On “Ruby Tuesday,” they create a very harmonious rock sound that really hits its stride in the chorus. The penultimate song is one of the best. With an organ based sound on full, intense display, “Whiter Shade of Pale” is one great psychedelic/progressive rock song that is probably still ahead of its time. Capping the album off is the soulful “Let’s Pray for Peace.”
When you get right down to it, Vanilla Fudge’s Spirit of ‘67 is a triumphant album. This is a fantastic album that pays tribute to one of the greatest eras of music.  Besides having a strong personal preference to the original versions of a song or two, this is top-quality music and is a real joy to listen to.  If you are fan of Vanilla Fudge or rock music from the 1960s, then this is one album not to be passed over.
4.5/5 Stars