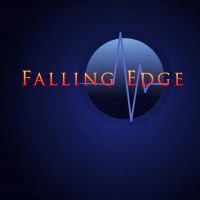 Falling Edge is a 4 piece symphonic rock band from Canada, which was initially founded away back in 2004. They are no strangers to this reviewer as one of the band; Chris sent me some of their music to broadcast on the radio show prior to the album being finished. Although formed a fair time ago, personnel problems (bass player and then keyboard player) caused the schedule for recording an album to slide. They had started to record what would be their self- titled debut album in late 2007, but these problems ultimately resulted in the album not seeing the light of day until 2013.
The current line-up of the band is Steve Kubica (keyboards), Chris Rupert (guitars, keyboards, and lead vocals), Kevin Tetreault (drums, percussion, vocals) and Jim Walsh (bass, vocals). The best way to describe the style of the band would probably be to suggest that they have taken a lot of the best “bits” from 70’s symphonic bands and added touches that hint at bands like Pink Floyd and IQ.
Falling Edge(the album) is a 5 track release with a total playing time of around 59 minutes. The album opener, “Social Engineering” is the longest track on offer at 16:40 minutes and the third track, “Not That Far Away” is the shortest at less than 6 minutes (5:39).
The album opening track, “Social Engineering” (16:40) thunders straight into an almost “manic” guitar passage with superb keyboards just behind, and then the vocals take over after about a minute. The track then goes through some simply stunning guitar passages which drift into synth passages and back to the vocals. The constant shifting from the slower quieter passages to the faster, more urgent phases, ensure that the interest is maintained across the entire 16 plus minutes. There is some terrific interplay between the bass/keyboards and guitar/keyboards throughout the track. The build-up to the ending is excellent, as Chris does a “machine gun” guitar fingering few passages to take the track out.
The second track, “Crippled By Fear” (14:34) has a haunting, ethereal keyboard passage behind a simple acoustic guitar. This is an instrumental track, or at least there are no words although there are examples of some vocalization, that goes through time changes and instrument changes seamlessly. The track highlights the skill of the musicians involved, especially the understanding between the guitar and the synths/keyboards. This is a very different track from the opener, but again, a stunning piece of work.
The two shorter tracks that then follow, “Not That Far Away” (5:39) and “Next Time around” are much “tighter” and don’t let the music evolve as do the other tracks, but this is not meant as a criticism. Falling Edge manage to vary the music throughout the album and these tracks highlight another side to the band’s repertoire. The first of these tracks, “Not That Far Away,” is acoustic, with an almost ethnic, tribal drum and bassy synth swirls behind a superb acoustic guitar. Probably not “Prog” in the truest sense of the word, but does remind me a little of a track I recently aired on the radio show in an “oldies” section, “From The Beginning” by ELP. This track is simple, melodic and a very satisfying track to relax to. “Next Time Around” is another acoustic based track along with guitar and vocals that almost drift along gently together, and I must comment on the vocals, which I assume are provided by Chris, as being unique in the way that the voices of Roger Chapman (Family), Peter Hammill ( Van Der Graaf Generator) and Mike Kershaw are. They are all voices that are instantly recognizable.
The final track, “I, Awake” (14:20) starts with more of that melodic guitar before the keyboards appear just behind. The bass and drums provide excellent foundations for this and throughout the album. There is some majestic interplay between guitars and the mighty Hammond organ, which then leads into a solo piano passage that fades away, but just when you think that the track has gone, it changes into something very different. Despite listening to the album many times, I am not convinced that this track works. There are some superb passages in this “new” part, but it is a bit repetitive and I feel it is the weakest track on offer. This track seems to be an attempt to move somewhere different within the music, but it doesn’t gel like the rest of the album does.
Falling Edge, the album, is a great debut, showcasing the skills that Falling Edge, the band, possess and although there is nothing here that will launch them into the stratosphere of prog greatness, they have produced some superb music, some varied music and tried something new, which wasn’t too successful. The album is worth several pounds, dollars or euros of anyone’s money and it will certainly be interesting to see if having a settled band will allow album number 2 to pursue the excellent blueprints that are on show in the opening two tracks of album 1.
4/5 Stars
Key Tracks: Social Engineering: Crippled By Fear: Next Time Around