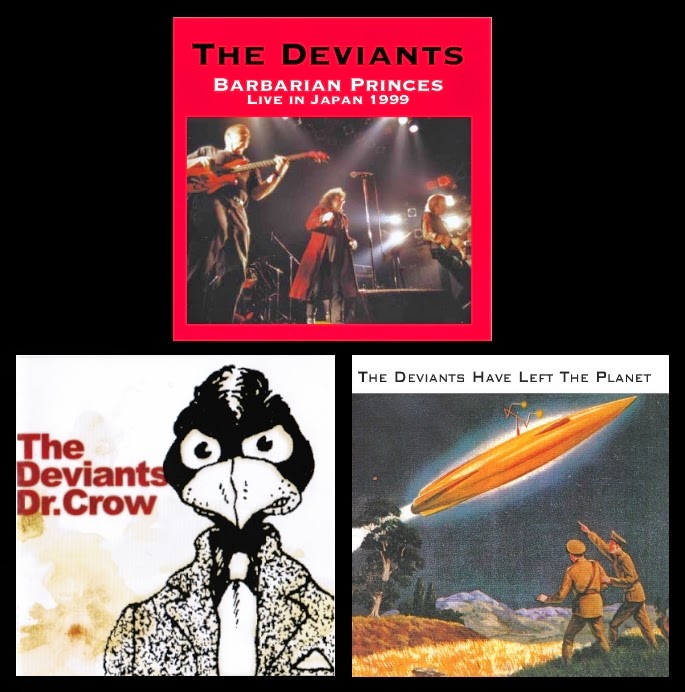 London, UK - Much to the excitement of punk rock fans around the globe, Gonzo Multimedia is reissuing the legendary Deviants back catalog. The Social Deviants were founded by singer/writer Mick Farren in 1967 out of the Ladbroke Grove UK Underground community, featuring Pete Munro on bass; Clive Muldoon on guitar, Mike Robinson on guitar and Russell Hunter on drums. The band shortened their name to The Deviants after Munro and Muldoon left and were replaced by Sid Bishop on guitar and Cord Rees on bass. With the financial backing of Nigel Samuel, the 21-year-old son of a millionaire, whom Farren had befriended, the group independently recorded their debut album 'Ptooff!', selling copies through the UK Underground press before it was picked up by Decca Records.

Rees left the band in June 1967 to be replaced by Farren's flatmate Duncan Sanderson and the band released a second album 'Disposable' through the independent label Stable Records. When Bishop married and left the band, Farren recruited Canadian guitarist Paul Rudolph, at the suggestion of Jamie Mandelkau. This band recorded and released the album 'The Deviants 3' through Transatlantic Records.

During a tour of North America's west coast the relationship between Farren and the musicians became personally and musically strained, and the band decided to continue without Farren, who returned to England where he teamed up with ex-Pretty Things drummer Twink and Steve Peregrin Took to record the album 'Mona – The Carnivorous Circus', an album interspersed with interviews with members of the UK Hells Angels, before concentrating on music journalism. The three remaining musicians - Rudolph, Sanderson and Hunter - returned to England, and teamed up with Twink to form the Pink Fairies.

In the mid-1970s, Farren was offered a one-off deal by Stiff Records to record an EP, 'Screwed Up', which was released under the name Mick Farren and the Deviants. The musicians on this record included Rudolph, former Pink Fairies/Motörhead guitarist Larry Wallis, former Warsaw Pakt guitarist Andy Colquhoun and former Hawkwind drummer Alan Powell. This band, without Rudolph, went on to record the album 'Vampires Stole My Lunch Money' and the non-album single “Broken Statue”, both credited to Mick Farren rather than The Deviants.

At the end of the 1970s Farren again concentrated on his writing and relocated to New York. He would resurrect The Deviants name for occasional live performances, such as these shows recorded in Japan with long-time friend and collaborator Andy Colquhoun. (To be released on April 28, 2014)

The legendary Mick Farren, for nearly forty years their singer and guiding light has stated that The Deviants were originally a community band which "did things every now and then—it was a total assault thing with a great deal of inter-relation and interdependence". Musically, Farren described their sound as "teeth-grinding, psychedelic rock" somewhere between The Stooges and The Mothers of Invention. The Deviants have been described as a transition between classic British psych and the punk/heavy metal aesthetic of the 1970s.

Andy Colquhoun, long-time Deviants guitarist explained, “It was recorded in LA. It was mostly recorded at some studio up in The Valley”. He went on to explain that there were actually two versions of the original album, and that the Gonzo release included two tracks that originally only appeared in Japan.

Tracks:
The Deviants - Dr. Crow
1. When Dr Crow Turns on the Radio
2. Strawberry Fields Forever
3. The Murdering Officer
4. Taste The Blue
5. Bela Lugosi 2002
6. You're Gonna Need Somebody On Your Bond
7. Diabolo's Cadillac
8. Song of The Hired Guns
9. The Man Who Shot Liberty Valance
10. Sold To Babylon
11. A Long Dry Season
12. What Do You Want?

The Deviants Have Left The Planet:

At the end of the 1970s, Mick Farren would resurrect The Deviants name for occasional live performances, such as in February 1984 when he teamed up with Wayne Kramer and Wallis' band which featured Sanderson and drummer George Butler. This set was released as Human Garbage. In 2002, a new line-up of the band (featuring bassist Doug Lunn, drummer Rick Parnell and vocalist Michael Simmons) released 'Dr. Crow'.

Farren then continued to perform and record sporadically under the name The Deviants, using a pool of musicians which include Colquhoun and former Blodwyn Pig saxophonist Jack Lancaster. 'Eating Jello With A Heated Fork' was released in 1996, credited to Deviants IXVI, followed by 2002's 'Dr Crow'. On June 25, 2011, after returning to live in the UK, Farren performed on the 'Spirit of 71' stage at Glastonbury Festival with 'The Last Men Standing'. The band included Colquhoun and the Deviants' late-1960s rhythm section of Sanderson and Hunter. During a rare performance by The Deviants at The Borderline in Central London on 27 July, 2013, Farren collapsed on stage. He died later in hospital.

This album was originally released in 1999. Critic Dave Thompson writes: “Half live, half-studio Left the Planet bristles with the highest octane intake of new Mick Farren songs in years - and anyone armed with the 'Barbarian Princes' live album will already know what that means. The bulk of the album was recorded with Farren's Deviants lineup of guitarist/bassist Andy Colquhoin and former Motörhead drummer Phil Taylor - itself an aggregation to make your skin crawl. Four live tracks from sundry Terrastock and L.A. shows, however, add a shapeless shadow to any sense of well-being which familiarity might conjure up...the overall mood of the album remains fearful, foreboding, and absolutely poisonous, a kick in the small of the back to propel you into a world which restructures the sound of the rock revolution before the media middlemen tacked their percentage on top - and it proves that some things really can't be bought or sold. Peace of mind is one of them.”

Tracks:
1: Aztec Calender
2: Gunfire in the Night
3. It's Alright Ma (I'm only bleeding)
4. God's Worst Nightmare
5. People are Afraid of Reality
6. Love Among the Zombies
7. Let's Loot the Supermarket again Like we did Last Summer
8. Yellow Dog
9. Mick Farren has Left the Planet
10 Twilight of the Gods
11. Memphis Psychosis