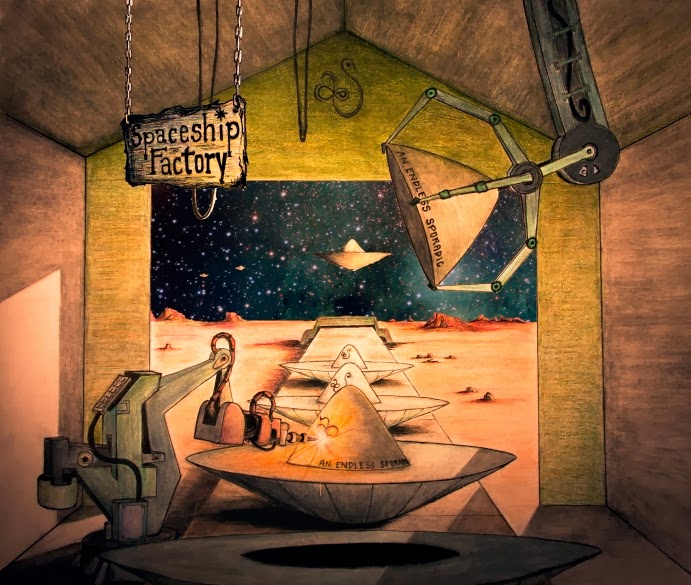 “A wild progressive sonic ride. It's thrilling to hear progressive rock that is fresh and inspiring. These guys are obviously very skilled and their music is brimming over with youthful creativity and vitality.” - Jordan Rudess (Dream Theater)

Los Angeles, CA - One of the most talked about up and coming prog groups of 2014, An Endless Sporadic, is releasing a new single “Spaceship Factory” in support of their upcoming appearance on the Progressive Nation at Sea 2014 cruise hosted by Transatlantic's Mike Portnoy! The band, comprising of Zach Kamins (guitars, keyboards), Andy Gentile (drums), Tony Solis (guitar), and Eloy Palacios (bass), have also filmed a new video to the single and can be watched here: http://youtu.be/jCe8NcS3yBs

Says Zach, “I composed the main theme for 'Spaceship Factory' a couple of years ago with the intention of it being part of an orchestral piece that would eventually morph into a progressive rock piece. I've always loved film scores in movies about big space adventures. So, I wrote a piece while imagining landing on an alien planet and coming across a factory building spaceships. When I originally came up with the theme, I wasn't sure how I wanted to develop the rest of the piece. Now that An Endless Sporadic has reunited, it seemed like the perfect vehicle for this piece.”

The band's new single will be part of a forthcoming EP that will also include a studio recording of the song “Derpulous” (the band released a demo version of the track a few months ago) as well as brand new material. It is also the 6 year anniversary of An Endless Sporadic's first EP 'Ameliorate', so plans to re-record a couple songs from that EP as bonus tracks are in the works. The group is planning on running a Pledge Music campaign to help fund the recordings.

Says Zach, “We have enough music demoed for a full length album and depending on how the EP does, we might want to repackage the EP as a full length later on. The idea is that because our music has a sporadic nature but also explores theme development, we want to try and find ways to expand on older material while introducing plenty of fresh material.”

Zach and Andy originally formed the band in 2005 in Houston, TX through a series of random jam/improv sessions together. Eventually, Andy moved to Los Angeles to work for Neversoft, while Zach moved to Boston to attend Berklee College of Music. The duo continued to write music together over the internet and eventually their song “Sun Of Pearl” was featured in Tony Hawk's American Wasteland video game. The track “Impulse” was added as a bonus song in Guitar Hero 3, and the track “Anything” has been featured in Guitar Hero: World Tour as free Downloadable Content in the Neversoft Track Pack. The band has a wide rage of musical influences, which can be heard throughout their work, and include ELP, King Crimson, Dream Theater, The Flower Kings, Pink Floyd, Porcupine Tree, Opeth, Dillinger Escape Plan, Sikth, Sleepytime Gorilla Museum, Primus, Mr. Bungle and Ozric Tentacles.

“A wild progressive sonic ride. It's thrilling to hear progressive rock that is fresh and inspiring. These guys are obviously very skilled and their music is brimming over with youthful creativity and vitality.” - Jordan Rudess (Dream Theater)

Prog guitarist Roine Stolt, best known for his work with The Flower Kings, Transatlantic and Agents of Mercy, produced the duo's self-titled, full length album with Jonas Reingold (of The Flower Kings) featured on bass. Roine relates, “A couple years ago I got contacted by an American band to help produce their record. I knew little about them but heard they've been into doing music for gaming. They were a dynamic duo called An Endless Sporadic. As soon as I said 'yes' I got my mailbox flooded with audio files with a gazillion 'out there' ideas. Zach Kamins, who is the main writer, is a young man with a vivid imagination and all the music he writes expose all freedom that I remember from yesteryears prog. Zach and Andy propose that progressive rock can be played even today, by 'kids' that could as well be...my kids. They have the relentless energy and the will to go beyond formula and I can see great things coming from the band in the future. Now it helps that they are friendly and fun people too.”

Here's what the press has raved about An Endless Sporadic's 2008 debut 'Ameliorate' EP and their self-titled, full length release in 2009:

“The whole album is an onslaught of riffs. The band never seams to run out of ideas of original guitar riffs often over layered with melodic leads. But what makes this band unique is more than just their interesting guitar parts linked together by odd time signatures, melodic soloing and chaotic breakdowns. Each song features unique extras that separate them from the rest of the songs on the EP and make everything sound fresh.” - Simon Harris, SCREAM!

“The bottom line with AES's debut album is to never get too used to one particular tune or motif as it will disappear before you realize how much you loved it...it's nonetheless a vibrant display of their skills.” - Joe Osborne, Geekadelphia

An Endless Sporadic is excited about their upcoming performance on the Progressive Nation at Sea 2014 cruise, which runs from February 18-22. Others performing are legendary Jon Anderson of YES, Transatlantic, Portnoy Sheehan Macalpine Sherinian, Adrian Belew, Devin Townsend, Spock's Beard, The Flower Kings, Animals as Leaders, Periphery and many others. Says Zach, “Sixthman ran a competition called Sixthman Soundcheck, where they were selecting three up and coming progressive rock bands to add to the bill. We actually weren't selected, but we later received an e-mail that Mike Portnoy had a hard time choosing the three bands and decided to add a 5th stage to the cruise. We were selected to play on that stage.”