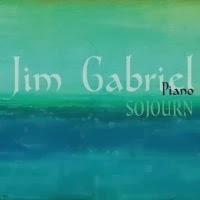 Release Date: November 13, 2013
Label: Rps Records
Website
James Gabriel began his journey into music at the age of eight.  Beginning formal music education with two full scholarships, he has not stopped pursuing his dreams. Traveling the world, he has taught in Mexico, performed for Pope John Paul II, studied under Naji Hakim in Paris and performed in various churches in the area. He has been a teacher and inspiration to students of all ages and is now the Director of Vocal Arts at Cranbrook Educational Community. Sojourn is a wistful look at his musical roots and a testament to a rich career that has brought joy to so many listeners the world over. Featured artists include Tony Levin, Eugene Friesen, William Ackerman, Jeff Pierce, Charlie Bisharat and Jim Gabriel.

Listening to this album was like a breath of fresh air and so is Gabriel’s elegant piano playing. Opening with “South Bend, IN 1989,” I was transfixed. The deliberately poised piano sequence literally stopped me in my tracks and I sat still and listened. Really, really listened. As a writer, I am always humming and doing a plethora of things at once. Not with this album. It was like a balm to my deadline ridden brain and I just sighed and let the music flow over me. Sweet and poignant, like watching Bridges of Madison County, this music takes you away from yourself and transports you. Softly spoken, this composition is a dust devil in disguise. A wispy breeze that makes you remember fonder times and smile.

“Sojourn” is the title track of this gorgeous album. This piece has Friessen on the cello, Pierce on the Chapman stick and William Ackerman weaving his magic with percussion elements. Gabriel sets the tone with his piano work, hypnotizing the listener with a spell of serenity. He chose wisely with the cover art indeed. Blues and greens denote tranquility and that is just what this track is. It is a wandering path into a land beneath the waves. A passage into a world less traveled by---an epic transformative piece.

“To the Sky” is love, light and bears an optimistic flair for a brighter tomorrow. Firm piano playing sequences both pensive and introspective give rise to dreams and the secret joys that fill our everyday lives. Liquid cello movements glide over the listener as you embrace the inner workings of the piece as it leads you to the start key to begin the journey all over again.

Jim Gabriel has performed for and worked with some of the greatest talents in music today. This album is a testament to that fact. It is beautifully orchestrated and flows like water. A teacher and mentor, Gabriel is in the unique position to guide students to explore their passions and show that hard work does pay off. Sojourn is a masterpiece of sound. Each track is woven to the highest standard and brings the listener on a harmonic journey outside of the day to day grind. If you want a spa moment and a transformative space, this album is one you need to try.