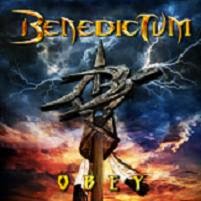 Artist: Benedictum
Title: Obey
Genre: Metal
Release Date: December 3, 2013
Label: Frontiers
Website: http://www.benedictum.net/
Benedictum is a pure, kick-ass metal band. Coming out of Phoenix, Arizona by way of San Diego, California, Benedictum is a four piece band made-up of Veronica Freeman (vocals), Pete Wells (guitar), Rikard Stjernquist (drums), and Aric Avina (bass). Obey is their fourth album and has them at the top of their game and it is the perfect album to start rocking out the New Year, as these twelve tracks will satisfy all your metal needs.
With an unrelenting sense of power and urgency, “Fractured” is a rocking song with tons of attitude.  Freeman has a voice to die for, as it soars about the blaring guitar and pounding drums.  If this does not get your juices going for Obey, then I do not know what will.  “Obey” is a heavy, aggressive song that will bring the walls down with its sheer power.  Freeman’s commands listeners to “Obey!” with a sense of regal authority that it is hard not to take note and entirely unforgettable.  The gritty “Fighting for My Life” and “Scream” keep the tempo up and the in-your-face attitude intact.  These are inspiring songs about persevering and surviving, especially “Fighting for My Life.”
“Evil That We Do” marks a change to the music becoming slightly more melodic, but the song is able to capture the aggressiveness of the previous songs, overall.  Freeman’s vocals will send shivers up your spine on “Crossing Over.” Not to forget about the amazing guitar that will certainly grab your attention. There is nothing like a power ballad and “Cry” is reminding me of those great power ballads from the 80s.  This is the type of song to turn it up and sing along to. “Thronz” and “Apex Nation” bring back the blistering heavy metal sound. “Retrograde” is a monster of a closing song, being a culmination of everything that has made Obey such a memorable album.
With a sound that is loud, aggressive, bold, and powerful, Benedictum is a metal band who should be on every metal fan’s radar. Obeyis nothing but quality song after quality song and this consistency has me interested in their previous albums as well, if this album is any indication of their skill. You cannot go wrong with Benedictum, as far as I am concerned.
4.5/5 Stars
Key Tracks: Fractured, Obey, Crossing Over, Retrograde
Brian McKinnon
January 10, 2014
Posted by Keith "MuzikMan" Hannaleck at 1/10/2014