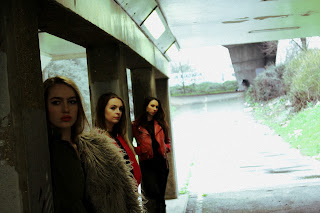 Britain’s Next Top Model’s Tallulah Bluebell revives modern feminist pop with all girl group The Truebelles. The Brit-school attendee joined Lorenna and Grace to form the power trio and share their passion for Women’s rights in latest single ‘Mister Nobody’.

Watch the music video for ‘Mister Nobody’ here:

The collective is made up of three entirely different, strong personalities that are all songwriters in their own right so The Truebelles choose to alternate lead vocals on each track. Although Tallulah is a successful model that made it into the last 12 of Britain’s Next Top Model, the trio strongly believe they must provide the right messages to young girls and it doesn’t matter if you’re not stereotypically ‘pretty’.
Tallulah’s wild personality isn’t just portrayed through The Truebelles’ music as she finds her urban exploration can’t always be controlled, leading to her breaking into derelict buildings to sketch and take photos. Her quirky character is also represented through her artwork, where she finds a muse and becomes obsessed until she has painted them.
Tallulah’s eccentric nature alongside Lorenna’s performing background and Grace’s musical history forms the most unique girl band of 2017. The trio have worked alongside major names, such as Lorenna doing additional voicing for Margot Robbie in the latest Tarzan film and Grace making music with Stevie Wonder’s bass player Nate Watts.