Joe O’Donnell: Channelling His Ancestors To Reclaim St. Patrick’s Day With His Blend of Indo-Celtic Music 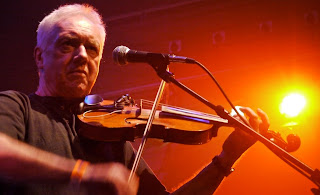 As a living descendent of the people who brought St. Patrick to Ireland, world music composer and violinist Joe O’Donnell is looking to bring the day of the Patron Saint back to its roots with his unique brand of Indo-Celtic rock.

Known as the ‘Princes of Donegal’, the O’Donnell family are closely related in lineage to Niall of the Nine Hostages, a High King of Ireland who brought St. Patrick back as a slave from a raid on Wales. Consequently, Joe’s Irish heritage goes back a long way and this is something he feels strongly about now that commercialism has overtaken St. Patrick’s Day with the misguiding, yet typical image of drunkenness and over-indulgence.  Joe feels that without losing the humour, there should be more emphasis on the historical roots and he plans to combat this with his one-of-a-kind style of folk inspired music.
Joe was keen to note that "St.Patrick, with his Egyptian hat and Graeco-Egyptian crozier, became the adopted Father of the Irish Nation. The celebration of that event on St. Patrick's Day used to embody the spirit of Irish creativity and culture. We need to bring some of that back to redress the balance."
Also, 2017 marks the 40th anniversary of Joe’s stunning concept album Gaodhal’s Vision, which tells the story of the Milesian people leaving Egypt and setting out for the island, foretold to them by Moses, called Eire (Ireland). The album displays Joe’s fascination with the esoteric and celebrates the origins of the Celts and many distinctive aspects of their famed culture.
As well as Joe, the album featured some highly talented musicians of the day including virtuoso guitarist, Rory Gallagher, with whom Joe enjoyed a warm musical friendship. As a result, the album was met with critical acclaim, partly due to Rory’s involvement, but also because of the quality musicianship and innovative compositions of O’Donnell himself.
To celebrate the anniversary, Joe will be performing Gaodhal’s Vision in its entirety with his band Shkayla (Gaelic for ‘stories’) on 31st March and 1st April at the Belgrade Theatre, Coventry. The band will be joined by guest musicians as well as Indian fusion and Irish dancers. The performance will also be accompanied by narration, visual projections and Rory Gallagher’s original solos, synced with the live show, making for a multi-sensual, multi-media experience.
Joe was classically trained but from his early experience working in rock bands, he quickly grasped the affinity between Celtic modal and Indian Music, and now his band Shkayla bring together aspects of these, mixed with jazz, rock and classical orchestral styles. Shkayla generate great energy and excitement through their music, channelling the sensitivity and delicacy needed to keep Celtic music faithful to its roots.
The 40th Anniversary Special Edition of Gaodhal’s Vision is set for release 28th April 2017.
Links:
http://joeodonnellsshkayla.com/