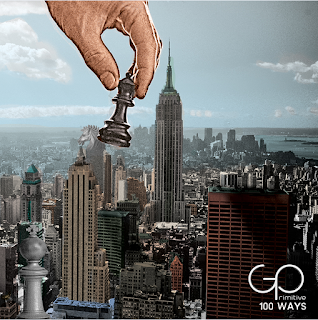 A four piece from the UK, Go Primitive are a band who specialise in contemporary rock with a unique twist, following in the footsteps of groups like Foo Fighters and Twin Atlantic while forging their very own sound. It’s an approach which is paying dividends, with previous tracks being fast-tracked onto BBC Introducing shows within a week of uploading.

Always working hard on new material, their next release sees them on rollicking form with new EP ‘100 Ways’, a five song collection inspired by the many obstacles placed in front of independent musicians. Lead single ‘Breathe in, Bleed out’ sees them on typical top form, showing Go Primitive’s rock credentials in all their glory and going all out to bust through those obstacles…

Produced by Romesh Dodangoda (Kids in Glass Houses, Funeral For A Friend, Twin Atlantic, Motorhead, The Blackout, Bullet For My Valentine,  Lower Than Atlantis, Bring Me The Horizon), the EP is unsurprisingly dazzling in its depth of quality. The attention to detail that has gone into infusing these studio tracks with the energy of a live show is what will set them apart. That same attention to detail has also been extended to the excellent artwork, produced by Kids in Glass Houses front man Aled Phillips.

That Go Primitive are associated with such names goes a long way to proving their credentials as they climb the independent music ladder. They have already supported The Subways, We Are The Ocean and others, getting a fantastic response from the big crowds along the way. This, along with the fact that they can count The Editors as fans, has given Go Primitive great confidence that they are on the right track.

It’s that confidence which has given rise in large part to the ‘100 Ways’ EP. In the band’s own words:
“The E.P is a show of our strength to overcome the struggles and constant roadblocks put in front of many bands at our stage. We hope that after countless efforts, this will be the E.P that makes our name stand up to the bigger acts out there and pushes us further in our musical journey.”

A perfect blend of four personalities all fighting for the same goal, the current line up of Go Primitive has moved through various iterations to land in its final configuration. With each band member bringing their own musical background and experiences from different bands and projects, this is one band with all the tools and the grit to break through in 2015.

Email ThisBlogThis!Share to TwitterShare to FacebookShare to Pinterest
Labels: 100 Ways, Foo Fighters, Funeral For A Friend, Go Primitive, Kids in Glass Houses, Motorhead, Romesh Dodangoda, The Blackout, The Editors, The Subways, Twin Atlantic, We Are The Ocean