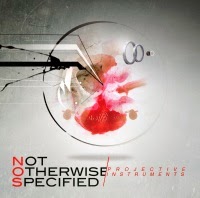 Although this is the second release from Not Otherwise Specified, going by the title of Projective Instruments, I must admit that this “band” had escaped detection under my musical radar. The “band” in question is a bit of a misnomer, in that Not Otherwise Specified is a one man, multi-instrumentalist Craig Kerley, and his debut release, which was well received, was the album, Judgment.

Apart from playing all the instruments on the album, Craig sings, and produced the album as well, although he does allow Jerry Guidroz (Neal Morse) to mix and master Projective Instruments.

Music wise, Craig does not meander much from the debut, which I’ve now listened to, but that does not mean this is in any way a retreading of paths already followed. Think Pink Floyd, early King Crimson evolving into Arena/Pallas and then venturing into the domain of Dream Theater and in that mélange somewhere you would find Not Otherwise Specified.

Projective Instruments is a 7 track album with a total playing time of around 63 minutes, with track 4, “Sorbet” at 2:38 minutes, the shortest on offer and then the epic “Racing Shadows” at 23:32 minutes, the longest piece on the album and is a 5 piece suite.

The album starter, “Harvest Soul” (9:46) is a storming piece of work. A genuinely heavy piece of metal, but thankfully  lacking the “growled” vocals, which blasts off immediately and then continues to fire on all cylinders, with some very melodic, almost gentle, passages. This is a terrific entry to the album Projective Instruments, which wants you to keep listening to what follows with interest.

“Hold On” (4:04) is again a track which demands attention with superb guitar, amazing synths and a powerful voice and also varies from areas of light and dark. The third track, “Falling” (11:20) fires up with some amazing bass, and is then joined with more guitar and keys. The main component of the tracks thus far, is to move easily from an all-out aural assault, to being gently subdued and this mixture of contrasts is excellent.

The short “Sorbet” (2:38) follows and is a gentle, haunting, acoustic track with superb acoustic guitar and ethereal/plaintive orchestral strings in the background built around a terrific melody line. From the shortest to the longest, “Racing Shadows” (23:32) , which can be split into 5 sections, “The Starting Line,”“Pitfalls,” I’m The Man”, “Fine Dead Song”  and  “Again.” A piano lead intro with excellent powerful vocals is soon joined by drums, bass and a wind instrument (possibly synth generated?) setting up a track that slowly builds. This is a real tour-de-force of a track with constant ebbing and flowing through many themes and ideas. From the simple, uncluttered areas, it can suddenly soar into a high energy workout. The playing time of this track is suitably disguised by the swings in the music that occur and the 23+ minutes appear to pass much quicker.

A very different track follows this epic with “Caveat” (3:56), which is an a cappella track starting with a solo voice and builds by adding others at different times and then stripping them away again. This is an unusual track that seems to work, but do not ask me why?

The final track, “Signal To Noise” (8:10) has a mixture of radio voices/clips vying to be heard before a plaintive piano theme starts up and an emotive vocal builds, to be replaced shortly by strings and a plucked acoustic guitar, before the vocal reappears. Around the 3 minute mark, there is a fair amount of jagged guitar riffs over some feedback with the vocals drifting down into the mix. Chiming guitars build from around the 5 minute point, leaving the voice “screaming” somewhere, away in the background. The track then shifts completely with another passage of keyboards/strings, before the jagged guitar riffs re-enter the scene and the track is on its way out, having bludgeoned itself, in a strangely painless manner, into your brain.

Projective Instruments is a rollercoaster of an album, in that it can produce moments of sheer poetic music gentleness and just as suddenly sweep everything aside as it “wakens the beast” of pure metal. Not an album for the fainthearted, or those with delicate hearing, but an immensely satisfying listen for all of its 63 minutes. I think that you should clear a space on the shelf for this one.