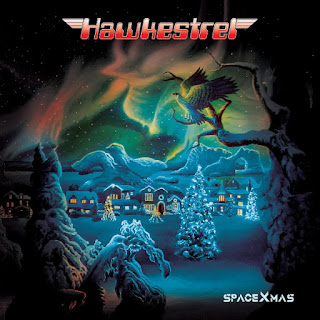 Los Angeles, CA - 2020 has been one helluva productive year for Alan Davey. Not only did Mr. Davey, best known as the former bass player for British space rock legends Hawkwind, launch a new album by his Hawkwind supergroup Hawkestrel, the adventurous Pioneers Of Space, but he also saw the release of a 4CD set of demos called Four-Track Mind as well as a 3CD set from Davey’s prog rock side project Pre-Med and even joined Danny B. Harvey’s rockabilly project Headcat 13 for an album! And now to top it all off, Davey has returned with a sleigh full of superb musical guests on an all-new Hawkestrel Christmas album! SpaceXmas includes performances by former Deep Purple vocalist Glenn Hughes, keyboard wizard Rick Wakeman, The Doors’ Robby Krieger plus Hawkwind alums Huw Lloyd-Langton, Nik Turner, and lots more who blaze their way through revamped versions of holiday favorites such as “We Three Kings,” “O Come All Ye Faithful” and “Silent Night” next to original compositions such as “It’s A Wonderful (Funny Old) Life” and the hilarious “Twelve Daze Of Drinxmas.”

Davey had this to share about the album, “My goal with this album was to turn Xmas songs into non-cheesy space rock pieces anyone could enjoy listening to. That was difficult enough, but in 110 degrees Fahrenheit in July/August and in the Californian high desert was kind of surreal. It turned out better than I expected.......Happy SpaceXmas!”

SpaceXmas is available now digitally as well as on CD and in a very special limited edition Christmas color splattered vinyl!