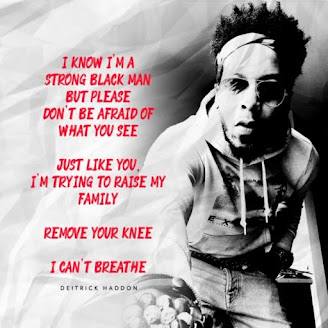 Every year certain albums and songs make history and are remembered for eternity.  And along those lines, some events change the world. 2020 was full of life-changing events and the most prolific and shocking was the unnecessary death of a human being. George Floyd will be remembered for his untimely death. I have never been so horrified when I saw the video of that fateful day. I am sure millions of other people feel the same way.

Deitrick Haddon and Mickey Stevenson got together to write a track titled "I Can't Breathe." 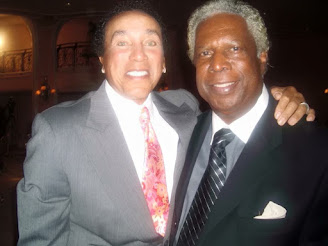 Mickey Stevenson (pictured with Smokey Robinson) was one of the most important and influential figures in the history of recorded music, making a name for himself with the legendary Motown label. The combination of Haddon with Stevenson is a powerful coupling that was a cannot miss proposition.

As you will see and hear with the video presented honoring George Floyd, there were no punches pulled and it all comes straight from the heart for both men.

Haddon has some strong pipes and lets go giving it all that he possibly could. The lyric video and images are equally powerful. This is about being an American, and our diversity and how every human being regardless of race, creed, or religion deserves respect. The music deflates the hate and causes behind events like we all witnessed this year.

"I Can't Breathe" is statement musically and spiritually. We are all one race living on one planet. Our commonality is the love for our fellow men and women and in the end, our love for the universal language of music comes shining through! Let it be a beacon of light leading us all down the right road.

ddon is a gospel singer, songwriter, music producer, pastor, and actor. He is best known for progressive gospel, and contemporary styles of music. He is also one of the cast members in Oxygen's reality television show Preachers of L.A. Contents.

Haddon launched his solo career as a Christian R&B vocalist with the Lost & Found on Tyscot/Verity in 2002. The set peaked at No. 1 on Billboard's Top Gospel Charts and received wide critical acclaim and spawned the hit "Sinner's Prayer" which was played extensively on gospel and mainstream R&B radio stations.

The 1970s-leaning Crossroads followed in 2004, led off by the upbeat single "God is Good". In an uncharacteristic move for marketing a gospel album, Haddon made an appearance on the long-running syndicated series Soul Train performing the single and the title track from the album.

Haddon appeared to be pushing his Gospel artistry further into the ranks of mainstream venues with 7 Days, released October 10, 2006. 7 Days was produced almost entirely by R&B producers Tim & Bob Balancing out the contemporary bulk of the album is the traditional gospel-flavored lead single "Heaven Knows" which Haddon produced himself.