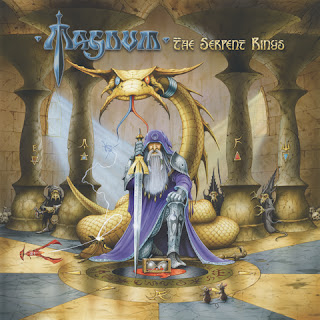 UK-based rock veterans, Magnum, are back with their 20th studio album, The Serpent Rings. Founders and driving forces, Tony Clarkin (guitars) and Bob Catley (vocals), have forged a unique melodic hard rock sound and have worked hard to evolve that sound. They’ve released studio albums every two to three years since 1979, each album borrowing from and building on the prior. Keyboardist Rick Benton joined the band in 2017, and together with a new bass player, Dennis Ward joining Lee Morris on drums, the rhythm section and the group as a whole seems invigorated.

The sound is rich and textured with hard rock, art-rock, and prog-rock undertones. Think of Traffic meeting Queen, meeting Metallica. Magnum steers the listener in and out of these atmospheres flawlessly, creating a dramatic and cinematic sonic experience. While the landscape is rich, the driving force is the guitar work of Tony Clarkin. Fear no more the demise of the almighty guitar solo. You’ll find one on almost every track. Clarkin appears to pause to take a breath before launching into his solos. This provides a dramatic calm before the storm, and once it hits, it sounds like an army crashing through the forest on their way to storming the castle.

Of equal importance is the attention to lyrical depth. If you listen as much to the lyrics as you do to the music, you’ll be pleasantly surprised by the wisdom conveyed in these songs. The galloping opening track “Where Are You Eden?” is no exception. “A picture hangs. It’s always been there to celebrate the news. Though people talk, they don’t understand. It only serves to confuse.”

“Not Forgiven,” chosen as the first single and lyric video, is a powerful and captivating rock song. It is somewhat formulaic, however, and there are better, more envelope-pushing tracks on the album.
“Madman or Messiah” breaks that envelope open with inspired guitar flourishes and haunting atmospheric keyboards. Other standouts include “You Can’t Run Faster Than Bullets,” and “The Serpent Rings.”

These are carefully crafted songs that don’t merely shout a mantra but tell stories, leaving the listener to use their imagination and relate those stories to their own lives. On The Serpent Rings, Magnum continues its consistent and impressive run of high-quality, distinctive hard rock.