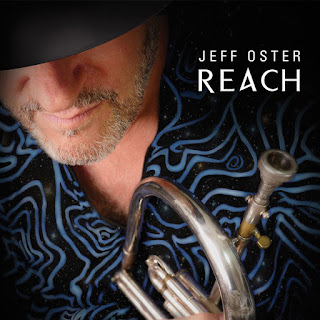 Three years ago, I covered Jeff Oster’s Next album. If you do a search on my New Age Music Reviews site it will show several other artist reviews as well. The reason is that Jeff is in demand to play on other people’s albums. There is a very good reason for this. He is one of the few Flugelhorn and Trumpet players in the genre that plays a chill ambient type of music that new age recording artists and listeners alike want to hear. He also is able to interject jazz and funk elements into his recordings. Besides that, it is a great partnership. Jeff is masterful with his instruments and with the new album out now titled Reach, he is in great form and so are the folks that accompanied him on the album.

Reach has nine tracks in total and it is a great mixture of sound and textures that will do many things to you while listening including relaxing, feeling energized and wanting to move, becoming contemplative, just about everything one person can think of or do during the listen of one album really. It invites you in at the outset and you never want to leave that “musical comfy chair.”
I love new age music when it combines jazz and world rudiments. “Le Caveau” is a great example of those sounds and atmospheres getting in sync. The music and sound clarity are amazing. The following track “Five Great Mountains” is just hypnotic. Jeff’s horn is superlative and the bass is incredible, in fact, I thought it might be Tony Levin, who seems to show up on everyone’s albums. It is, in fact, Benjamin J. Shepherd, who plays a huge role in the track, and the entire sound of the album actually. His rhythm and musical leadership in the track are exemplary. That kind of preciseness allows the star of the show to shine even brighter, so hats off to Benjamin for doing such a great job with his instrument. Everyone involved in this project is outstanding so I felt the need to list the credits below.

Some of the other instruments on this recording, besides the horns of course, that give it an overall world-jazz flavor, are the Erhu and Indian Flutes. Then there are very calming spiritual tracks like “The Lotus Within.” In my estimation, the reference would be the Lotus flower, a symbolically important aquatic Asian plant also known as the Indian or sacred lotus.  The emphasis is on sacred for this magnificent composition.

To keep things fresh and on your “listening toes,” Jeff follows those two critical tracks with an upbeat jazz and funk-filled number titled “Troppo Y Boffo.” The Latin percussion and bass pulsate and drive the number while Jeff just glides through with his horn putting the veritable icing on the cake. It is Latin bliss, wonderful and colorful as it gets. This track could find a home on any good (worthy) jazz album.

Jeff Oster puts it all together on Reach. Every track is solid and consistent throughout. The combination of instruments, musical style and artistry of every contributing musician make this album one of the best in the genre this year. This comes as no surprise to me as everything I have ever heard from Jeff has been superlative from his own recordings to being a guest on other recordings. He is in a groove that keeps him at the forefront of the music industry and I can see that influence growing more all the time. In conclusion, I think that he will Reach a much larger audience with each successive release