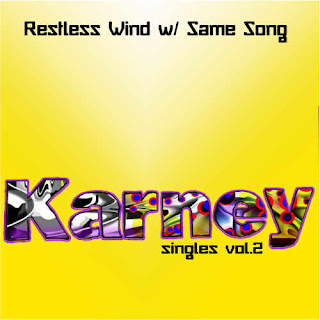 San Francisco - Karney is a San Francisco-based singer/songwriter that has been making great music for many years, performing across the US and collaborating with many talented and notable artists. Keeping her mind on social justice and positive messages, her lyrical content offers a sardonic and sometimes straight forward approach to many of the issues facing people today, with a message of hope resonating throughout every song she writes. Karney is digitally releasing a handful of new songs between August and the end of 2016 in support of her upcoming full-length album Renditions, due out in early 2017.

While Karney’s eclectic songwriting is based in solid musicianship, her new material echoes a diverse set of musical influences. She will release a series of digital EP’s, featuring a few different renditions of her new songs on each, through her own independent record label, Karney Music & Sound. The second in the series, Singles Vol. 2: Restless Wind w/ Same Song, was released on November 18th, 2016. This digital EP will include 2 versions of the track “Restless Wind” ranging from a solo acoustic to a full rock band version with drums, bass, electric guitars, overdubs and top notch production. The release will also include solo acoustic to a full rock band version of “Same Song.”

Some songs in the upcoming series will feature additional remixes rendered by some of Karney’s producer colleagues and friends, exploring Karney’s music in an assortment of other styles. These releases will culminate in a full album of recordings titled Renditions, which has a tentative release of March 2017.

Also joining Karney on these new recordings are members of her live band, including long time musicians Jeff Herrera (Drums), Kimon Manolius (Bass and Vocals) and Mike Doyle (Guitar), while Karney holds down Guitar and Lead Vocals and Keyboards on all songs.

Additionally, Karney is very excited to be working with New York based visual artist Susan Kaprov, who will bring a dynamic visual interpretation to her songs with assorted artwork. Kaprov’s work is in the permanent collection of major museums worldwide such as the Museum of Modern Art NY, Metropolitan Museum of Art, and Museum Boijmans-Beuningen in Rotterdam. www.kaprov.com

Karney has had a diverse musical career, having spent many years composing music for computer games with credits such as Monkey Island IV, Star Wars Galaxies, Armed and Dangerous, many Sim City titles, Metal Dungeon, Death Jr. and many more.

She is also now adding youth choral director to her list of musical endeavors, having recently received the esteemed “Dreamcatcher” award from the Visual and Performing Arts division of the San Francisco Unified School District for her work as a choral teacher and conductor for middle and high school students, as well as her contribution to the furthering of music education in the San Francisco public school system.