Boston, MA - Hot on the heels of their critically acclaimed self-titled debut album, Boston rockers Neon Alley are releasing a new video “That's How It Is”!

Watch Neon Alley's “That's How It Is” video:


A Young Woman wakes on the floor, trapped in a nebulous white room. It's minimalistic and sparse but evokes the future. There's only a white cube furniture piece with a VR headset on the center. She waves her hand over the cube and holograms of the band appear behind her (in the style of Star Wars holograms). They begin to play. As the guitar lead begins, she dons the headset and is taken to various spaces in a Virtual Reality world. And in each scene she becomes a different person.

In each scene she experiences what it's like being in someone else's body through her avatar. Some bodies are interesting. Other bodies are uncomfortable. So she leaves each scene in search of a better body/persona until she finds herself in an avatar that looks just like her own body except she's clean, nicely dressed in 50’s retro style. The body fits so well that she begins to dance and rocks out, having the time of her life.

End with her back in the white room as she sits down, sweaty, and removes the VR headset. She laughs. What a blast.

Camera cuts to a WS outside of the room and we see multiple rooms, each with one person. Each person looks dejected, upset or depressed. Except for her.

Says guitarist and band leader Dave Vaccaro, “The video, like the song is about the people we cross paths with and interact with everyday. Kind, clever, smart, slow, inspiring, funny, good or bad. It's just how people are and that's never going to change. The only thing that you can control is how you react to them. Like our woman in theVR headset (played by Shannon Ashe), some of the people she becomes she likes. Others she finds interesting, and still others she can do without.

“Wouldn't it be interesting to be somebody else for a time? Who would you be if you could be someone else for a day?

“Directed by Valdimir Minuty the video is one of several interpretations of the song that the band felt best represented the idea of 'That's How It Is'. Since Vlad is an artist as well as a film maker (he does great story boards BTW) he was able to translate the feel of the song in a very basic way that worked quite well given the limited resources we had available to us.

One thing we didn't want was a typical performance video of the band playing in some dilapidated industrial building. We really like how the video turned out, especially the sci-fi vibe of it. It's different.”

The live footage was shot all in one day at a studio/sound stage in Allston, MA called Red Sky Studio with post production taking another few weeks for edits and revisions.

BACKGROUND: David Vaccaro's story in music has a rare upward sweep. Vaccaro has journeyed from hardscrabble Boston club dates to the 90's music scene of Los Angeles and creative collaborations with some of melodic rock's platinum selling vocalists. With the self-titled debut album of his new band Neon Alley (out on DMV Music), Vaccaro revisits that visceral soulfulness of his early days. This collection of originals including a cleverly re-imagined cover is perfectly crafted for sweat-soaked live performances.

And Neon Alley has been doing just that, sweat-soaked live performances in clubs in and around Central Massachusetts, working their live show and earning a reputation as one of the best live bands in the area.

“...David carries a talent for carrying a tune, and there are plenty of those reverberating in hummable hard rock fashion. Highlights are carved out in the form of 'That's How It Is', a catchy rock anthem and the dreamy echoes of 'I Only Want to Be With You'. The cover of 'Jailhouse Rock' is another favorite; a refreshing reworking of the classic...” - Daniel Pavlica, therocktologist.com

“This album chock full of guitar-driven modern classic rockers kicks off in fine style with the thunderous 'That's How It Is', and backs it up with the more melodic 'All I Want', before that aforementioned cover, a rather unexpectedly ballsy 'Jailhouse Rock'. Wow, what a brilliant rendition these boys bring to the fore here, which they follow up with the drum-led 'I Only Want To Be With You'.” - Exclusive Magazine

“Neon Alley, It is loud, it is brash, it is exactly what Classic Rock should be.” - Simon Barrett, Blog Talk Radio

“NEON ALLEY: A solid dose of arena rock in search of an arena, this power trio delivers the kind of classic headbang that will speak for the generation throughout the generations. For teens that go to music festivals where it’s about rocking out instead of seeing and being seen, it’s like the 80s and 90s never left. Hot stuff that raging hormones will totally understand.”  - midwestrecord.com

“Grab a copy of this album, put it into your car, roll the windows down and crank it up while it’s still warm out and cruise to your heart’s content.” -  Altered Frequencies.com

“The new eight-song release begins with the guitar-riff driving rhythm of "That's How It Is" which will get the blood pumping.”  - JP's MusicBlog.com

To purchase Neon Alley's debut CD: http://www.dmvmusic.com/store
You can also buy CDs and t-shirts at: http://shop.bandwear.com/collections/dmv-music-shop 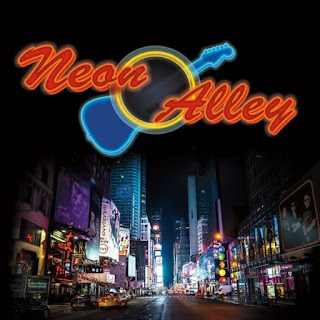