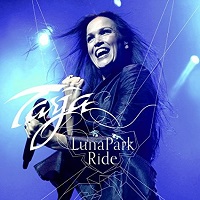 Sometimes the right voice can make all the difference.  The right voice can make everything just click into place and make a song that much more captivating and memorable.  Tarja Turunen has this type of voice.  Her powerful and lovely voice is one of the most dynamic and noticeable working in the genre today.

Known for her time as the lead singer of the Finnish symphonic metal band Nightwish that she co-founded, Tarja has embarked on a solo career following her departure from the band in 2005.  The soprano has released four solo studio albums to date, with 2013’s Colours in the Dark being the most recent.  In addition to the solo albums, there have been three live albums.  Luna Park Ride is her latest live album, recorded at Stadium Luna Park in Buenos Aires, Argentina.

The album gets off to an okay star with “Dark Star.”  Tarja’s voice sounds good, especially during the chorus, but the sound of the music is not the cleanest sounding and this gets in the way of it from being a stellar start. The crowd screaming on “My Little Phoenix” is always unpleasant to listen at the beginning, but it dies away as the song starts and gets things flowing with some throbbing drums, and heavy guitars. “The Crying Moon” keeps the direction of the album going in the right direction with a real symphonic rocker.

The album really starts hitting its stride with “I Walk Alone.”  It is one of the better songs on the album and the music has a great atmosphere and dark ambience.  The vocals are on point, with a personal quality to them as if she is telling you a story by a campfire before she soars away during the chorus.  “Falling Awake” is a real rocker.  The guitar steals the show with a sweet sounding solo about halfway through the song. With a fairly serene opening, the sound of “Signos” is much lighter and low-key than the rest of the songs. The hard rocking “Little Lies” sports a heavy symphonic metal sound, completed by Tarja’s seductive and hypnotic vocals.

With “Underneath,” the album is right in the middle of its strongest section.  The somber “Underneath” changes the tone, brings down the tempo, and puts Tarja’s powerful vocals on full display.  “Stargazers” brings the tempo right back up and rocking with its manic and spacey sound. “In For a Kill” and “Ciaran’s Well” keep the quality tunes going, especially “Ciaran’s Well” and its kick-ass rock sound that bursts out of the gate and never trips up.

There is a blip on the screen with “Where Were You Last Night / Heaven Is a Place on Earth / Livin’ on a Prayer Medley.” I have heard other medleys like this before and I have never liked them that much.  I particularly do not like it here because I think that these 80s songs do not fit well with the rest of the album and sound out of place.  Thankfully, “Die Alive,” “Until My Last Breath,” and “Wishmaster” are here to end the album on a positive note.  The energetic “Until My Last Breath” has an enticing opening, with seductive, rhythmic vocals, and a pulsating outro.  “Wishmaster” is strong finisher with its wild and lively sound that carries the tenacity of a charging bull.

If you are looking for some sweet symphonic metal music with stellar vocals, then Luna Park Ride is a good place to start.  Sure, there is a song or two that I do not particularly care for, but that does not take away from all the other quality songs on the album.  Tarja’s main draw is her stunning voice and she does not disappoint on Luna Park Ride.