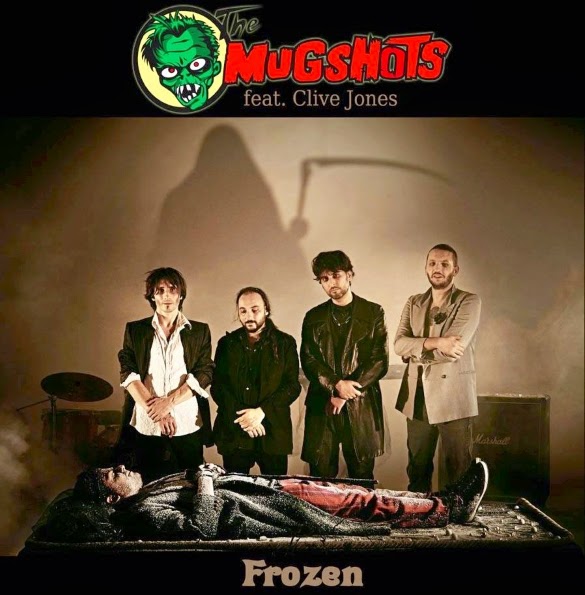 “I am very proud of this music and of The Mugshots for their tenacity and terrific talent!” - Dick Wagner

Brescia, Italy - Gcm Music & Alka Records proudly present “Frozen”, the new single by The Mugshots; the first European band ever produced by legendary Dick Wagner. The song is a very personal cover of a famous Madonna's masterpiece and features (unfortunately his last work) Clive Jones on sax and flute, from the legendary English band Black Widow - the first group to introduce occult themes in Rock music. Mastering has been accomplished par excellence by Dr. Gil Markle, long time collaborator of Dick Wagner, who has also worked with Aerosmith, Stevie Wonder and The Rolling Stones, just to name a few.

Says lead vocalist Mickey E. Vil ,“Working on 'Frozen' has been a unique human and artistic experience. Clive Jones knew this would have been his final work and, as his life faded away, he channeled all of his vital energy into his flute and saxophone to add the song an ethereal dimension.”

The Mugshots are an Italian rock group who's influences are primarily Alice Cooper, along with The Stranglers and The Misfits. The quintet from Brescia have already released two albums and several EPs. Though based in Italy, The Mugshots were born in New York City in 2001 when lead singer, Mickey E. Vil, visiting the United States, chose the band's name after listening to an Alice Cooper record (“DaDa”, 1983). As their name would suggest, dark crime stories have infused the band's lyrics from the very beginning. As the Mugshots’ line-up was developing over the next few years, the band released two full-length albums, “House Of The Weirdos” and “Weird Theater” plus an EP, titled “Doctor Is Out”. Then in 2009, the band's present line up was consolidated. In 2010, The Mugshots released a limited edition EP titled “In Disguise” through an independent Italian record label. This EP was made available on both red vinyl and CD and garnered enthusiastic reviews around the world.

In 2012, The Mugshots teamed up with the legendary Dick Wagner, producer and guitarist for such great rock icons as Alice Cooper, Lou Reed, Kiss, Aerosmith, Peter Gabriel, Ray Manzarek and Mark Farner among others. This collaboration resulted in another EP titled “Love, Lust and Revenge” on which Wagner arranged, co-wrote and played lead guitars. Dick Wagner sadly passed away in July 2014, making this EP one of his last productions.

“A perfect European/American mixture of Rock sensibilities and mystery that is worldly and unearthly at the same time. I am very proud of this music and of The Mugshots for their tenacity and terrific talent!” - Dick Wagner

Throughout their career, The Mugshots have shared the stage with The Stranglers, The Damned, UK Subs, Hugh Cornwell, Dick Wagner, Brian James, TV Smith, Eddie And The Hot Rods, Baz Warne, The Lords Of Altamont, Demented Are Go, Koffin Kats, Zombina & The Skeletones, among many others.

“I made the decision: Mute the TV and put on my new favorite band, The Mugshots. And it hit me...like a steam train...like a gang-fight, like an atomic bomb - I was bruised, beaten and pummeled by the incandescent brilliance of The Mugshots!” - Matt Malley, Oscar nominated songwriter and founding member of Counting Crows

“I would say regardless of Genre the sound is brutally bombastic, rude, crass, and altogether beautiful. Definitely worth nabbing for fans of energetic and bizarre music.” - Fangoria Magazine

CHECK THE VIDEO OUT HERE: