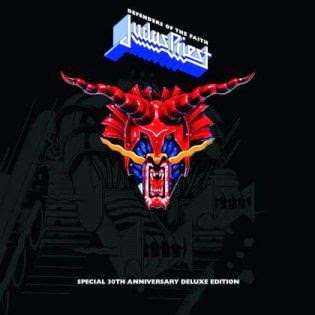 Defenders of the Faith is a Judas Priest classic metal album that is celebrating 30 years since its initial release. The 30th Anniversary Deluxe Edition offers the original album remastered with two additional discs of live material. All the live recordings are from a show at The Long Beach Arena on May 5, 1984. The set comes in a cardboard fold out case with a slip cover the goes over the top of the demon on the cover. A booklet with some accounts of the band is included with several pictures of the time period. It is a quality package that music fans and collectors will appreciate.
The live material shows a band at height of their powers and in full command of their live set with the ability to energize a crowd, not to mention the Metal God had a full head of hair. The sound quality is excellent. I have heard some of these live tracks on previous reissues however this is the entire show all packaged together for this special release.
After going through their entire catalog over the years and having the opportunity review their box set three years ago, and then seeing how this album stood up against the rest I felt it was a good album but not great. Well I think after hearing it once again coupled with the two live discs I have a different viewpoint (of course that is ever changing and evolving with each passing year).
Defenders of the Faith does stand up there as one of their best and certainly they have several great albums that have been released in their long illustrious career, Screaming for Vengeance, British Steel and Nostradamus come to mind quickly. Having had the pleasure of seeing them three times now on a stage I can attest to their appeal to metal fans worldwide. I saw them on the British Steel 30th Anniversary Tour and it was amazing. I don’t know if it’s in the cards to do the same thing with the Defenders of the Faith album but it would fun.
Of the ten tracks presented on the album most hold up well to this day. “Jawbreaker” still holds you spellbound with electricity and power while “The Sentinel” (albeit with some melodic guitar lines to kick it off) has always been a favorite and of course the tribute to the blood lusting vampire “Love Bites,” still can grab your attention and bring visions of horror and evil. “Heavy Duty” is just that, heavy metal at its very best. It has the perfect title and the term “heavy” is easily assimilated and envisioned through the music.

This is a strong album but not a 5 star affair as some of the aforementioned releases, however it is still very strong and given further recognition with this special anniversary edition that includes an excellent portrayal of the band in the 80’s. It is classic Judas Priest, what more can one say, it is without a doubt a must have for fans of heavy metal and a testament to their undying popularity and relevance in the metal community. The front cover should be adorned with the sticker “Gotta Have It!”