Rock/Blues Review: Under The Influence: The Songs That Made Them Rock- Robert Plant & Led Zeppelin’s Jukebox 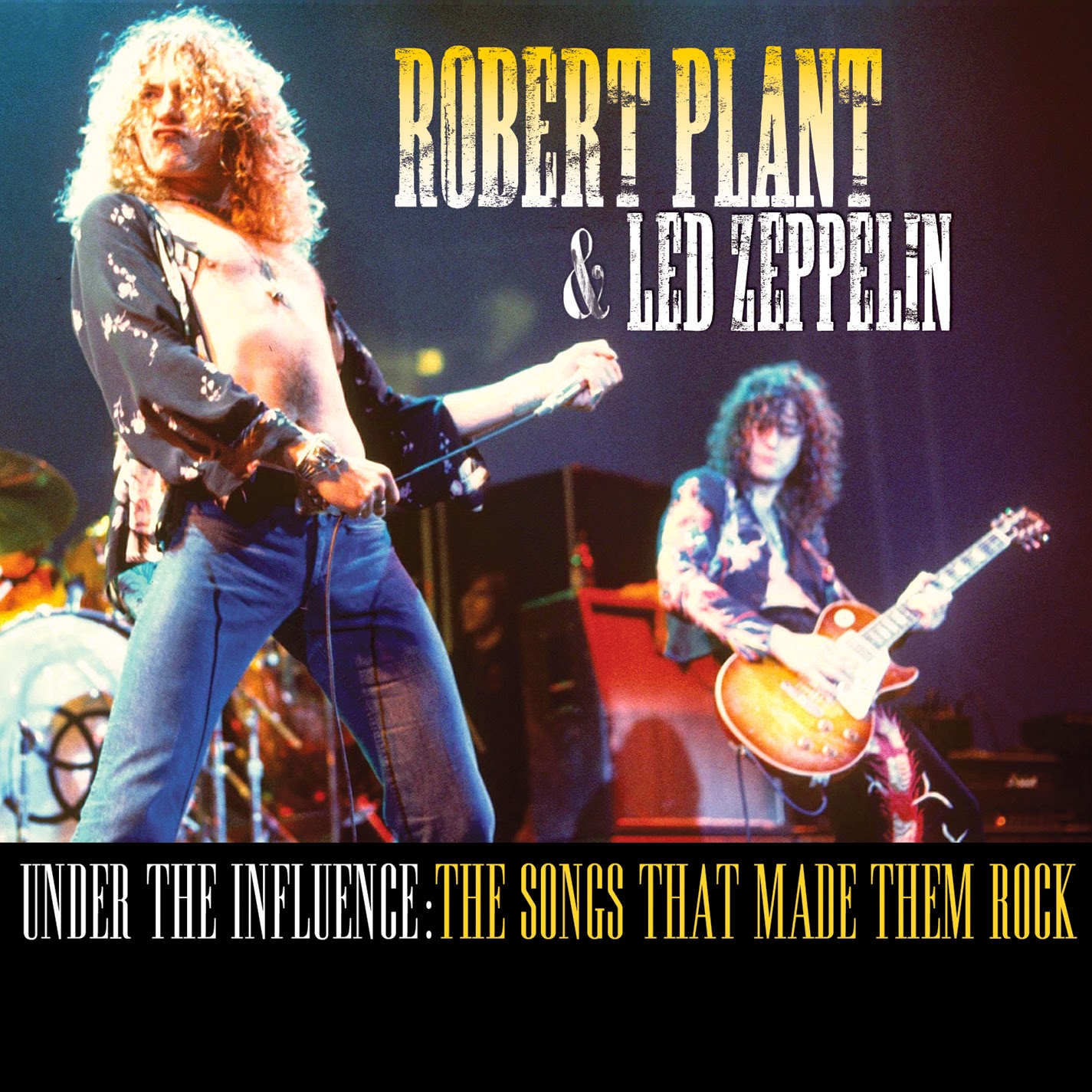 Led Zeppelin are one most influential and important rock bands in the history of music. Formed out of the ashes of the rock band The Yardbirds in 1968, the four members of Led Zeppelin, Robert Plant (vocals), Jimmy Page (guitars), John Paul Jones (bass, piano), and John Bonham (drums), have ascended to the realm of rock gods.  Their songs are iconic, there sound is imitated, and their success is dreamed of. However, all of these things did not happen overnight.

There are always those who came before, those who have paved the way. They are shoulders these rock giants stood on, in addition to being giants themselves. And Led Zeppelin’s & Robert Plant’s Jukebox are albums about sharing the works that set them on the tracks to rock stardom. It is a brilliant compilation of some of the most talented performers across multiple genres, including blues, rock and roll, and jazz to name a few.
There are some of the most electrifying performers in all of music featured with appearances from Elvis Presley (“Baby, Let’s Play House”), Little Richard (“Tutti Frutti”), and James Brown (“I’ll Go Crazy”). Blues is heavily featured on Jukebox with legendary blues guitarist B.B. King showing everyone how it is done on “Three O’Clock News” and the slide guitarist Elmore James on “Dust My Broom,” whose influence is undeniable. Not to mention his piercing vocals. The likes of Sonny Boy Williamson I, Sonny Boy Williamson II, Blind Boy Fuller, Blind Willie Johnson, Bukka White, and John Lee Hooker among others make for an incredibly strong showing for the blues. This album would not be complete without Chuck Berry, who should be on everyone’s Mt. Rushmore of guitarist, and his classic rock song “Maybellene” is just one reason why.
There is also Tiny Bradshaw’s “The Train Kept A-Rollin,’” which became a favorite opener of Led Zeppelin.  Also, there are instances on direct influence that can be seen in Led Zeppelin’s work. Howlin’ Wolf’s “How Many More Years” influenced “How Many More Times” on Zeppelin’s debut album.  Then there is Robert Johnson’s “Travelling Salesman Blues” and Arthur McKay’s “She Squeezed My Lemon” lyrical influence on “The Lemon Song.”  Kansas Joe McCoy and Memphis Minnie’s song about the Great Mississippi Flood of 1927, “When the Levee Breaks,” should be easily recognizable to any Zeppelin fan.
Jazz and rock and roll are the next two prominent genres on the album.  There’s Charles Mingus’ smoky jazz instrumental “Haitian Fight Song” and the blistering “The Drum Battle,” which is just amazing. It is a live performance of a drum battle between jazz drummers Gene Krupa and Buddy Rich. The live recording really plays into its favor because the crowd is really into it and their enthusiasm transfers over to the listener. At one point an audience member can be heard saying “Go, Buddy, go!” amidst the cheers and whistling. It makes me want to have been there. It also reminds me some of John Bonham’s solos, especially in concert for the lucky ones who got to see Led Zeppelin play live (I envy you), while the rest of us who were born too late are stuck seeing the magic on home video.
Instrumentals are not the only thing that are hot on this album, because there are some very good and powerful vocals, as well.  There is the Ray Charles’ quintessential rhythm and blues hit “I Got a Woman,” and “Lessa Faker” from Uum Kalthoum, and “Ahenn Elek (I Miss You)” from Abdel Halim Hafez.  The latter two showcase poetic quality of the Arabic language, while showcasing the Middle Eastern musical influences that can be found in Led Zeppelin’s work.
One of the most unforgettable songs on the album comes from Muddy Waters. His “Mannish Boy” is a powerhouse of a song, the classic answer song to Bo Diddley’s “I’m a Man.” It is the type of song that you know is special before it is even over. Once you hear this song you will never forget it. The drumming, the guitar riff, the powerful, meaty vocals, and the visceral “Yeah” screamed throughout the song will leave a lasting impression. Speaking of Bo Diddley, he also makes an appearance with his classic upbeat rock song “Who Do You Love.” Listen to that sweet sounding guitar.
There is also a spattering of folk and psychedelic rock as well.  Pete Seeger (“Cindy”) and Tim Buckley (“Song to the Siren”) representing folk and Jefferson Airplane (“The Ballad of You and Me and Pooneil”) and Moby Grape (“Omaha”) adding the psychedelic rock influences. If you are into the music of the 60’s and 70’s, then you probably have heard of Jefferson Airplane, but Moby Grape might have flown under the radar. The recording of Moby Grape’s “Omaha” is not of the best quality but the guitars really go at it. It is a shame that the quality was not better.
The sound quality is one of my main points of criticism of this compilation. The majority of the songs are of very good quality; however, because many of these recordings are from the period spanning the 1930’s to the 1950’s, the sound quality is an issue given their age. Also, the differing genres might not be to everyone’s taste as blues fans might not like psychedelic rock and rock and roll fans might not enjoy jazz or folk music. It is a concern, but I think that it is worth the risk in expanding one’s musical horizons.
Led Zeppelin’s Jukebox and Robert Plant’s Jukebox is a fascinating and an eye-opening 2 disc set that gives insight into the main influences of one of the greatest bands of all time and its legendary lead vocalist. Jukebox is jam packed with classic and hit songs from a diverse range of music genres. It is a celebration of the giants that came before and an interesting look into the creative process. With many songs dating from the 1930’s to the 1950’s, this set will have you searching out these music greats.
4.5/5 Stars

Disc One:
1.Baby, Let’s Play House
2.Three O’Clock News
3.Dust My Broom
4.No Place to Go
5.Evil
6.Haitian Fight Song
7.Trukin’ Little Woman
8.I Got a Woman
9.The Drum Battle
10.The Train Kept A-Rollin’
11.Mannish Boy
12.Good Morning Little School Girl
13.Eyesight to the Blind
14.Bottle Up and Go
15.Maybellene
16.Tutti Frutti
17.Traveling Riverside Blues
18.She Squeezed My Lemon
19.Gallis Pole
20.When the Levee Breaks
21.I Want Some of Your Pie
22.In My Time of Dying
23.Nobody’s Fault But Mine
24.Mystery Train
25.Boogie Chillen’

Email ThisBlogThis!Share to TwitterShare to FacebookShare to Pinterest
Labels: Blues, Music Reviews, Robert Plant & Led Zeppelin’s Jukebox, Rock/Blues Reviews, Under The Influence: The Songs That Made Them Rock, Write A Music Review