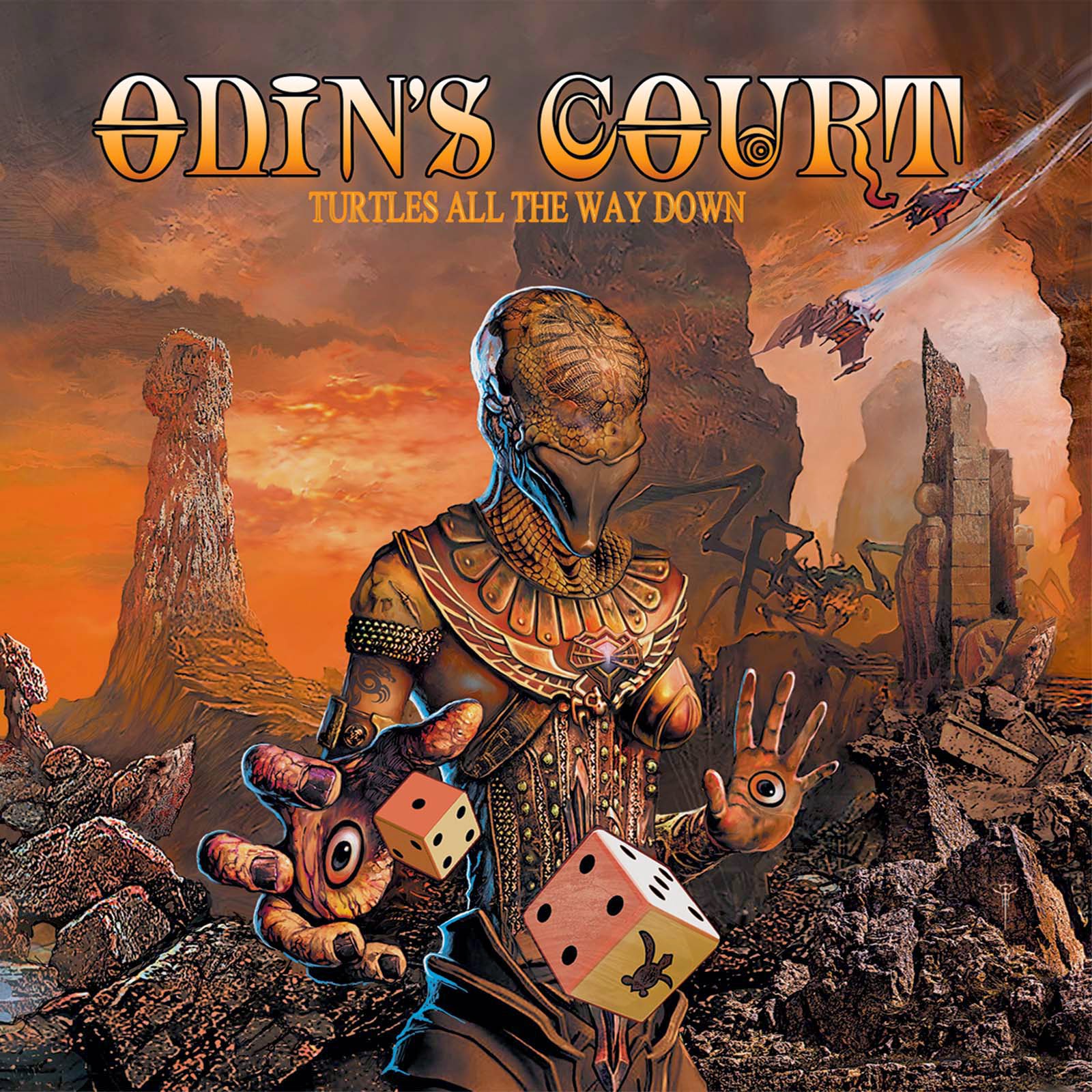 Baltimore, MD - USA based progressive rock and metal band Odin's Court's eagerly awaited 5th album Turtles All the Way Down will hit the streets on March 3, 2015. After releasing four diverse albums on ProgRock Records internationally, Odin’s Court will release their latest album independently through their own label D2C Studios.

Band leader Matt Brookins commented on the latest album: “On Turtles All the Way Down, our sound is refined with a balance of modern and classic vibes, while still retaining the signature 'Odin's Court' sound. We also have the 'missing piece' that completes us – a new vocalist that can bring the emotion and technicality to the music that it deserves. Dimetrius LaFavors' vocals, combined with the more mature song writing and production, have taken us to the next level.” The artwork was done by French painter J.P. Fournier.

As with all of the Odin's Court full length releases, the newest is a concept album. This album deals with ideas and questions relating to the entire universe – how did it start, where is it going, what makes it tick, what is its purpose, etc. – from the point of view of the individual's mind. It deals with mankind's quest for knowledge, and how that knowledge changes. New discoveries often change humanity's understanding or turn perceptions upside down, sometimes making long held beliefs immaterial. The title refers to the idiom that references “infinite recursion” or in layman's terms, “what came first: the chicken or the egg?”

Brookins commented on the concept: “In a nutshell, Turtles All the Way Down is about the quest for knowledge, and how the human race learns more through experiments, observation, and discoveries over time. New findings may challenge long held beliefs, which in turn may cause deep thoughts in one's mind for how these findings impact personal or social beliefs. While the songs are much more accessible, the music still has serious intricacies for the technical music lover. The melodies and harmonies with the vocals are catchier than our past work, but thematically this album deals with pretty heavy subject matter. For the prog lover, the concept and lyrics are definitely an order of magnitude above 'Nerd Rock' since it is largely inspired by physics. Of course, the other important inspiration is human emotion, as no matter what science may observe, individuals' experiences always have an intangible factor to them that cannot be truly expressed or understood in textbook terms – they have to be learned through life.”

Check out the video to the first single from the album “…But What’s the Question?”: http://youtu.be/hxkk4gavGnE

Brookins explained the meaning behind the song, “The first single from Turtles All the Way Down is ‘…But What’s the Question?’ The song speaks to humanity’s need to question everything, and while asking questions is important towards obtaining knowledge, we may not always be asking the right questions. Environment and genetics contribution towards individuals and social conditioning, which in turn may result in programming people’s perspectives. Perspectives can warp and shadow the way we approach problems or questions, and thus cause people to often ask the wrong questions - which means getting the wrong answers.”

Odin's Court is a Maryland, USA based band that was formed by Matt Brookins in 2001. The band is best described as progressive metal & rock, fusing classic and modern sounds that transcend several genres. In 2013, the band picked up lead vocalist Dimetrius LaFavors; with a voice reminiscent of classic vocalists in the rock, metal, and progressive genres, he added the “final piece” needed to polish off the band's sound, while still maintaining a unique voice. Rick Pierpont, an infectious presence on stage, provides excellent and exciting leads that soar through the music. Brookins provides additional vocals and performs on various instruments as needed, doubling as band producer. The current line up started gigging in 2013, and has been winning over new fans with each show performed.

Here's what the press have raved about Odin's Court:

“You just want to sit back and let the music wash over you.” - Hardrock Haven

“The very core of songwriting...is very good so there is plenty to sink your teeth into.” - Metal Revolution

“A truly impressive effort, with solid songwriting and outstanding musicianship. Terrific melodic prog/metal that gets better with every listen!” – USA Progressive Music

“4.5 out of 5: Turtles All the Way Down is an exceptional album of classic melodic progressive rock and metal…Easily recommended.” – Danger Dog

“Odin's Court mixes metal and hard rock to a tasty menu that you can enjoy anytime.” – Proggies.ch

In closing Matt Brookins has this to impart, “The main message is that life is a beautiful journey and as far as we can observe with empirical results, only happens one. So stop and smell the roses. Question things. Seek knowledge. Learn. Gain experience. Don't believe everything you're told without your own research. Don't be a slave to old ideals or institutions if you have reason to believe new discoveries tell you something else. Form relationships and work to sustain them.”