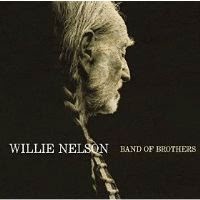 Debuting at number five on the Billboard Top 200 chart and number one on the Billboard Country chart for the first time in twenty eight years, Band of Brothers is classic Willie Nelson at his country singing best. Nine original songs out of fourteen tracks bring back what Willie is best at-his ability to write songs that reach into the grit and texture of humanity.
From the beginning of the album with “Bring it On” you have a harmonica entwined with pedal steel and some percussion that stirs the blood. The lyrics throw a glimmer of challenge to the human condition, daring the fates to ‘bring it on.’ A rousing track, this is the perfect beginning to an album rich with imagery and emotion.
“Used to Her” is a fun and punchy number reminiscent of the faster, dance step country I grew up with. Plucky with cocky harmonica accompaniments, the vocals are well matched with the snap your heels on the dance floor and swing those hips mover of a song. Burnt bacon and bluegrass. How could you possibly go wrong with this inspiring song?
“Band of Brothers” is the title track for the album and one of my favorite pieces. The guitar playing and layers of music are woven together flawlessly. Moving into the future together, family is a bond built by love and respect. Guitar strings, harmonica and some percussive elements swirl and bob along to craft a song full to bursting with memories and life moments.
“The Git Go” has a bluesy gospel feel but is the least appealing song on the album. Lessons of life and too much in the way of politics make this one stand out from the rest of the pack. While it has some thought provoking points, it misses the artful mark the rest of the album holds.
In Willie Nelson’s long and distinguished career he has performed countless concerts and has a catalog of albums longer than my arm. His voice is smooth as butter and can turn to steel or velvet depending on his mood. His music has grown with me and seen me through my formative years. It is so wonderful to see this great artist writing original works again. If you are a Willie Nelson fan, you need to get this album. From fun and plucky to a little bit on the political side, it’s a musical experience you’re going to want in your collection.
4.5/5 Stars
Key Tracks: Bring it On, Used to Her, Band of Brothers, The Git Go
Tracks:
01. Bring It On Willie Nelson
02. Guitar in the Corner Willie Nelson
03. The Wall Willie Nelson
04. Whenever You Come Around Willie Nelson
05. Wives and Girlfriends Willie Nelson
06. I Thought I Left You Willie Nelson
07. Send Me a Picture Willie Nelson
08. Used to Her Willie Nelson
09. The Git Go Willie Nelson with Jamey Johnson
10. Band of Brothers Willie Nelson
11. Hard to Be an Outlaw Willie Nelson
12. Crazy Like Me Willie Nelson
13. The Songwriters Willie Nelson
14. I've Got a Lot of Traveling to Do
Dana Wright, Sr. Staff Writer
July 9, 2014
Review Provided By Write a Music Review
Posted by Keith "MuzikMan" Hannaleck at 7/09/2014