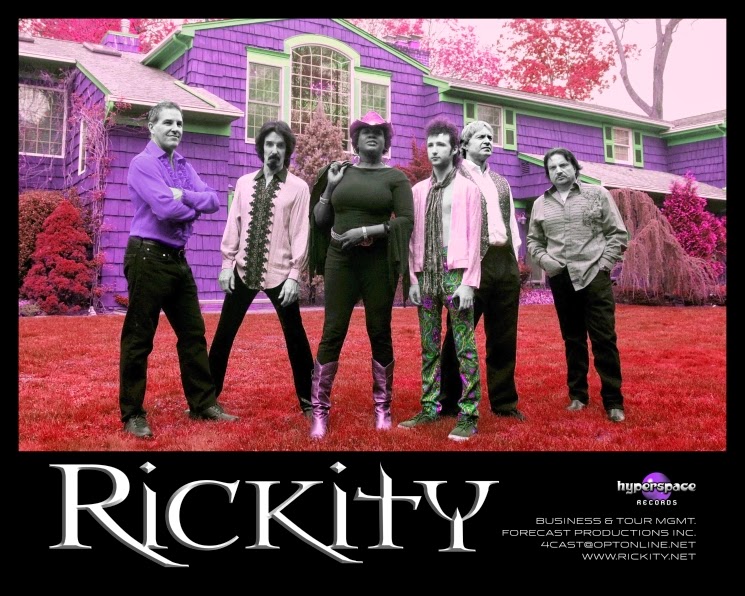 NYC – Highly anticipated debut album by “super group” Rickity, a New York City, classic rock 'n' soul band performing great original songs, is now available! Featuring bassist/harpist Randy Pratt, best known for his work with The Lizards, Cactus and Vanilla Fudge, the new album titled 'Greatest Hits' has been released on Hyperspace records. The band members have played, toured the world and recorded with Vanilla Fudge, Cactus, The Funky Knights, Seven Turns and The Lizards. In Rickity they have found their ultimate vehicle of expression. The seasoned rockers have added highly respected R&B vocalist Perrita Kitson and the combination is thrilling. Lead guitarist Jesse Berlin has the chops, soul and imagination to be at the top of the heavy rock universe. His solos are jaw dropping adventures.

Says Randy Pratt, “Our goal is to combine R&B, soul and blues with classic heavy riff rock. Perrita is the real deal. She spent her whole career in R&B, Soul and Jazz..this is her FIRST rock band!”

Perrita adds, “Rickity’s Recipe is take some hard core classic rock, add some funk, and divvy up some really colorful lyrical lines and you have ….. RICKITY. I hope the Rickity band will be appreciated and admired in representing classic rock.. all the way baby!”

Says Randy, “The band formed in my basement, as usual...lol! Our new guitarist, Jesse Berlin, did his first gig with us on his 21st birthday! He's spectacular! The two Pauls and I (Paul Latimer on guitar and keys, Paul Gifford on vocals, percussion and samples) have played together for decades. We can read each other's minds and complete each other's sentences. Neil Cicione is the engine of the band...a total badass on the drums.”

Rickity has shared stages with the likes of The Doobie Brothers, Billy Squier, Rare Earth and headlining as their star continues to rise. The band will be performing at B.B. King's Blues Club in NYC on June 17, 2014, and the Sellersville Theater in Sellersville, PA opening for Black Oak Arkansas on July 3, 2014!

Says Randy, “We can duplicate everything you hear on our CD live. We have two great singers and we're tight as hell! We are a no B.S., muscular, classic rock band...accent on the HEAVY. We broke some rules with our combining of styles, but it feels natural and intense. Our songs are mostly about sex, so I guess our message is...ENJOY!”