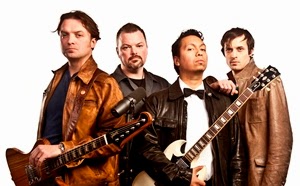 Ann Arbor, Michigan-June 17, 2013-Black Note Graffiti is made up music veterans Rick Ortiz on vocals and guitar, Adam Nine bass guitar, Kurt Keller percussion and Kris Keller guitar and vocals. The band performed previously as Krescent 4 before forming the new lineup.
In support of their recent release Volume 1,they are proud to be playing at the upcoming Ann Arbor Summer Festival, which is also referred to as A2SF2014. The band and other acts are participating in The Top of the Park which is a free outdoor event that's part of A2SF2014 schedule. The Rackham Stage is situated outside Rackham Auditorium on a large music stage that sits across Ingalls Mall/ Park.
Volume I was just picked up by ESPN to be used in NASCAR, which is fitting for the band’s powerful and fast moving sounds. The band is really excited about the momentum and recognition the release has gained thus far. They are anticipating an exciting time introducing all the new material on a live stage.
One reviewer commented on the new album: This is a fantastic hard rock album with a lot of talent on display. You get it all in one package, a band with an ultra-cool name and sounds to match-Keith “MuzikMan” Hannaleck
The Ann Arbor Summer Festival is an exciting celebration of performing arts, outdoor entertainment, and community spirit that starts in June and runs through July. A boutique music and arts festival, the three-week gathering offers dozens of performances, activities, exhibitions, and screenings representative of the best in music, dance, comedy, film, circus and street arts, and family entertainment.
There will be six music acts performing there and Black Note Grafitti will go on stage at the Main Stage Summerfest July 5th at 7:00 pm.
The day after all the fireworks displays across America is through and all the noise has faded away, there is sure to be plenty more explosions of sounds with Black Note Graffiti making their way through the songs on Volume 1. If you enjoy outdoor events, live music, and electrifying progressive metal then this is a show that should not be missed!
Company:Noteborn Music Company
Contact:Kris Keller
Email
Website
Posted by Keith "MuzikMan" Hannaleck at 6/17/2014