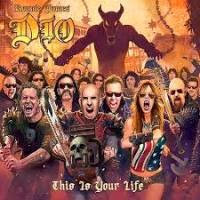 If there ever were to be a Mount Rushmore of the best lead vocalists of heavy metal, there is a more than a strong case to put Ronnie James Dio on it. His tragic death from cancer at the age of 67 put an end to one of the heavy metal’s longest and most memorable careers. With Dio providing his famous voice for such bands as Elf, Rainbow, Black Sabbath, and, of course, his very own band, Dio his legacy remains intact. He also popularized the sign of the horns hand gesture that is so heavily associated with metal music. He has gone too soon, but his music lives on and the metal world pays tribute to his work.

This is Your Lifeis a 14 track tribute album produced by his wife Wendy, and featuring some of Dio’s greatest hits. Such iconic songs as “Rainbow in the Dark,” “Holy Driver,” and “The Last in Line” are covered by some of the metal world’s main players and biggest names. Anthrax, Metallica, Motörhead, Biff Byford of Saxon, Rob Halford of Judas Priest, Corey Taylor of Slipnot, and many more all cover a song or make an appearance.

Opening up this tribute album is “Neon Knights” by Anthrax and they freaking nail it. This is a cover song done right and it is probably the best song on the album. It comes out with a jolt of energy that electrifies the room with everything sounding just right. This is what it sounds like when everything is spent and all of one’s heart and effort it put into something. Dare I say that this one is flawless? Next up is Tenacious D’s cover of “The Last in Line,” which is a good effort but it does not touch the original.  I generally enjoy Tenacious D, but Jack Black is no substitute for Dio. Adrenaline Mob’s cover of “The Mob Rules” is almost as good as the opener. They are tearing it up on this one.

“Rainbow in the Dark” will probably be a love it or hate it type of cover for most fans. I do not think Corey Taylor is on the same level as Dio, but I think he does do a good job of giving this classic song a go. Halestorm’s “Straight Through the Heart” will the type of song that grows on you with each listen. Motörhead really shred on “Starstruck” backed by the vocal styling of Saxon’s Biff Byford.

Scorpions’ version of “The Temple of the King” is another highlight of the album. It is a song that is softer than the rest, with a soothing atmosphere that hits all the right spots much like “Catch the Rainbow.” Doro provides a haunting rendition of “Egypt (The Chains Are On).” Her vocal performance is the kind that leaves an impression, which is made even more memorable by the menacing music as they together to make a fantastic song. Killswitch Engage’s cover of “Holy Driver” is my least favorite song on the album, and I say that as a fan of the band. All the changes do not do anything for me and do not think that the screaming fits well.
Oni Logan, Jimmy Bain, Rowan Robertson, and Brian Tichy deliver the goods on “I” with great performances all around and sound like they are enjoying themselves. “Man on the Silver Mountain” is a lackluster cover with Halford sounding like he is phoning it in. There is a good guitar solo, but I find it hard to get into this song. Metallica help to the end on a high point in the penultimate song “Ronnie Rising Medley,” a mashup of “A Light in the Black,” “Tarot Woman,” “Stargazer,” and “Kill the King” that is a lot of fun to listen to, as it is just a great show of skillful musicianship. Dio’s “This is Your Life” is the perfect way to end the album, with the master himself showing how it is done with a haunting piano backdrop. It is a poignant choice that will probably make some eyes water.
When all is said and done, This Is Your Life is a very solid tribute album that does Dio’s legacy justice. Though I do think that a few songs will be divisive and not knock hardcore fans out of the park, most of the covers are done well and the effort that went into making them can be heard. But, hey, Ronnie James Dio is a tough act to follow, after all. I think that This Is Your Life makes for a nice addition to any metal fan’s collection.

Key Tracks: Neon Knight, The Mob Rules, The Temple of the King, Egypt (The Chains Are On)