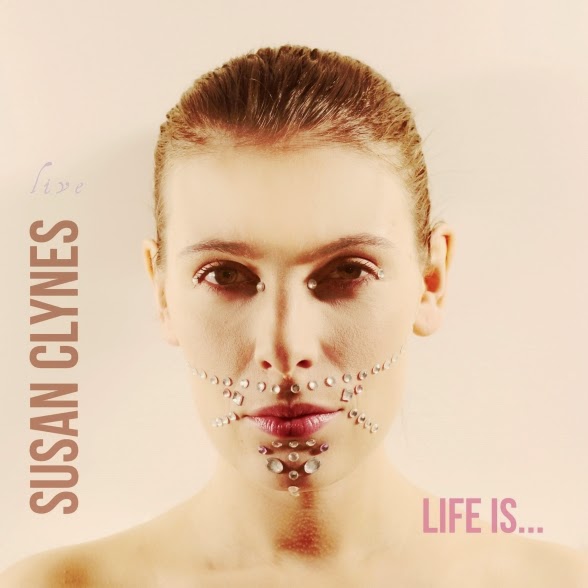 New York, NY - “Life Is...” marks the international debut of Belgian singer/pianist Susan Clynes, on New York based MoonJune Records. This release was compiled from three live concerts done at two different locations, each one with a unique band configuration.

The Archiduc, an historic Art Deco bar in Brussels dating back to 1937, served as the backdrop for two of these performances. The first was done in trio format with Nico Chkifi on drums and Pierre Mottet on bass. The second was a more intimate solo performance at the Library of The Cultural Center of Bree. The third and final performance saw the return to the Archiduc, this time as a duet with Simon Lenski on cello. Each band configuration provided its own framework and pallet of tonal colors for these diverse sound portraits.

“A Good Man” and “Ileana’s Song” make playful use of the drumkit and bass. These clever songs lie somewhere between Slapp Happy-era Dagmar Krause, Elaine Di Falco’s work with Thinking Plague, Annette Peacock and early period Kristin Hersh in her band, Throwing Muses. The chiefly instrumental piece, “Les Larmes”, a composition about the Israeli-Palestinian conflict, is brimming with emotional expression making excellent use of the cello as a universal human voice.

The distilled and emotive songs for voice with piano accompaniment bring to mind such undervalued luminaries as Laura Nyro and Essra Mohawk. Susan’s piano work runs the gamut from such radio-friendly performers as Tori Amos and Fiona Apple, briefly dipping into Tony Banks-like arpeggiations and cascades, and arriving at the jazz-inflected polytonality of French composer, Darius Milhaud.

Liner notes by Sid Smith:
( Freelance music writer and author of numerous sleeve notes. A regular contributor to Prog magazine, BBC Music and other publications, he is also the author of In The Court of King Crimson and Northstars. You can find out more at sidsmith.blogspot.co.uk )

“In my dreams the people speak, of who they are, and what they seek”

There are points in your life when you have to go with the moment. You donʼt always know what the consequences will be of such a choice, or if the path you go down is ultimately the right one. Yet in your heart of hearts you sense itʼs the right thing to do. You go with the moment and take that leap into the unknown.

Susan Clynes knows all about going with the moment and taking the leap.

“It was 2004 and I was in the final year at high school and I was attending a jazz summer camp in Libramont in Belgium. I had no clue as to what I wanted to do with my life and although Iʼd played music from a very young age, when it came to thinking about what to study at university, I was thinking about doing something not at all related to music. I didnʼt want to be a concert pianist or a classical composer or that kind of thing. As far as I knew there wasnʼt a school for the kind of music I wanted to do. So, I was probably on the verge of signing up to do something like philosophy or psychology not music. When one of the teachers at the camp heard I was thinking of going in a different direction he told me ʻYou have to study music: if you do it part-time youʼre not going to grow to your full potential.ʼ”

Her first CD, Sugar For A Dream, was released in 2005 (with Ramses Donvil on drums & Sebastien Thomé on bass) and in other circumstances could have heralded the beginnings of a standard singer-songwriter career path; courting the big labels and looking for the big breakthrough. Instead, Clynes followed the advice sheʼd received at the camp and went on to study composition, eventually obtaining her Masters degree at the Ghent Conservatory. The result was the emergence of a far more rounded talent, not only capable of mapping out the emotional geography of the heart and head at a piano in a solo concert, but scoring a viola concerto or guesting with Belgian prog-jazz outfit The Wrong Object.

That kind of open-mindedness is a crucial aspect of Clynesʼ approach and led directly to one of the partnerships featured on this album, another leap into the unknown. “I first saw cellist Simon Lenski with an Antwerp band called DAAU, part of the Rock In Opposition movement playing instrumental chamber rock. I loved what he did and so I called him to ask if he wanted to play with me. With Simon I didnʼt have to worry about explaining what the song needed. He immediately felt all that. Itʼs almost telepathic when we play.” Thatʼs certainly a quality that can be discerned in the exuberant interplay Pigeonʼs Intrusion and the rushing tension created during Les Larmes. “I want to make music that bridges the different worlds of songwriting and instrumentals of compositions and improvisation. I want to talk to the heart but not forget thereʼs also the mind.”

It was precisely these qualities which forcibly struck MoonJune Recordsʼ Leonardo Pavkovic after Clynesʼ husband Antoine Guenet, keyboard player with Univers Zero, recommended that his wife should sing on The Wrong Object's After The Exhibition, and in March 2013 suggested to Pavkovic that she should ʻjoin the great Moonjune familyʼ. “Antoine is really a driving force behind me and is always urging me to go forward. They often say behind every great man is a great woman but in this case the opposite is more than true” laughs Clynes.

Itʼs impossible not to notice the surging optimism coursing throughout Clynesʼ work in both the instrumental pieces and the songs which make up this album. Though some individuals become cynical, jaded or world weary, those arenʼt descriptions that could ever be applied to this artist. “Life is what you choose to make of it / will you stop or will you grow?” isnʼt just a line from the title track: for Clynes, itʼs akin to a personal manifesto. “I try to put in a positive message but without the songs sounding naive. Itʼs about having perspective and how you handle a situation. Not only about how to make the best of it but see it as an opportunity to make yourself be the best person you can be. You donʼt always have control of a situation but you do have a choice about how youʼre going to respond.”

The writing of the material on this album coincided with two significant events in Susanʼs life; the birth of her daughter, Ileana and the death of her aunt, Yoka. “While I was giving birth, Yoka was being cut open to find brain tumors in her head. She died of a rare cancer which she was born with and didn't know she had for most of her life.”

Clynes cites her aunt as someone who also was unafraid of going with the moment and taking that leap into the unknown. “She was always very passionate about plants, and just a few pages before finishing her doctoral dissertation, she decided to take a world trip and ended up just staying in New Zealand, founding a herb factory.” Having spent eight months working on the writing of the song itʼs easy to understand why Clynes regards Childhood Dreams as one of cornerstones of the album. “She lived her childhood dreams and taught me to savour each moment as though it might be your last.”

Itʼs eight years since Clynesʼ last album and in deciding to release live performances, sheʼs also putting her instinct for absolute perfection to one side, opting for a more spontaneous approach. “You can spend years making sure everything is just right, over- thinking everything. Obviously every artist can be a little hyper-critical of what theyʼve done and itʼs the same with this album. I notice that there are little things here and there that could be improved. But this is a statement about one moment in time where an artist does as good as he or she can in front of an audience.”

“Itʼs all about going with the moment and taking that leap. With 'Life Is...' we take the leap with her.”

• Promo cds and high quality promo digital downloads of the album available in generous quantity.
• Susan Clynes is available for interviews.
• After promotional shows in her native Belgium, Susan Clynes will do a short promotional tour in the USA in Spring 2014 with possible performances in Brazil and around Europe (planning is in process).
• Similar known artists: singers Tori Amos, Annette Peacock, Essra Mohawk, Fiona Apple, and Laura Nyro; pianist Tony Banks.