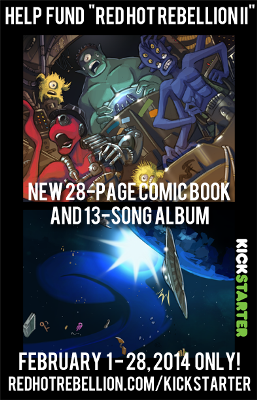 A full-length comic book AND concept album about a band of intergalactic heroes out to save Earth with the power of rock 'n' roll.

A comic book AND an album? Say what!?

You heard it right! Red Hot Rebellion II is a full-length comic book AND music album. Both go together like peas and carrots. Like peanut butter and jelly. Like Batman and Robin. Like Marshall amps and rock ‘n’ roll!
In their first self-titled album, Dayton, OH rockers, Red Hot Rebellion, released a comic book where each single page of the book went along with each single song on the album. RHR bassist/vocalist, Jim Tramontana notes, "It has been super popular with music fans, collectors, and the comic con crowds. So, we decided to expand on the concept and create a more expansive story-telling universe. The music, the lyrics, the story, and the art are all inextricably linked together in one super awesome visual and audio experience."

·         The innovative concept! This is a full length, 28-page comic book AND 13-song album. The comic and album are two parts of the same story.
·         The great art! Amazing pencils by Scrap/Seven Sisters artist, Chris Martin. Colors by IDW colorist, Julie Wright.
·         The fun story! For fans of Rock & Rule, Heavy Metal, This Is Spinal Tap, andMetalocalypse, this is a fast-paced, high-stakes adventure with a side of humor.
·         The amazing music! 13 high energy tracks of pure rock fury! Whether you call it arena rock, punked up metal or metalish punk, it's 13 explosive megatons of rock 'n' roll!

What's it all about?

In all the universe, only a handful of sentient worlds create music, let alone the most evolved form of music: rock ‘n’ roll. Earth was on track to be admitted into the Galactic Union, but somewhere along the line its rock ‘n’ roll turned weak. RED HOT REBELLION, the second best band in the galaxy, has been sent to Earth in order to steer humanity back on its proper path. But it looks like they've hit a few snags...
Listen to a three-song album teaser: https://soundcloud.com/red-hot-rebellion/sets/red-hot-rebellion-ii-teaser
Watch the promo video: http://youtu.be/5f7VpSIURv4
Visit Kickstarter campaign page: http://redhotrebellion.com/kickstarter
Posted by Keith "MuzikMan" Hannaleck at 1/29/2014