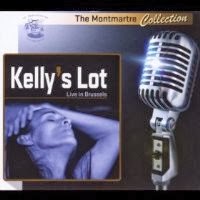 Release Date: July 15, 2011
Label: Kelly’s Lot
Website
Roadhouse rock and upbeat blues is the smoky flavor you get when you pick up a Kelly’s Lot album. Formed in 1995 by singer Kelly Zirbes after playing for family and friends, she embarked on an international music career that has spanned several releases and multiple live performances. Live in Brussels was released in Belgium and in the United States. After touring France and the UK in late 2013, the band will soon begin a new recording for a full band album introducing keys and a horn section. The band consists of Kelly Zirbes (songwriting, vocals), Peter Robinson (composer, keyboards), Matt McFadden (bass) and Rob Zucca (guitar).
Live albums can sometimes be a fifty-fifty shot. Some are good and you get the emotion of the band. Some make you want to hide in the closet and turn the album into a coaster. Live in Brussels is thankfully the former. I listen to music while I write. Most of the time the sound blends into the background and becomes part of my story in one way or another. This album took me to another place-a smoky blues café. How wonderful. The Americana and Southern roadhouse rock sound of this live album took me out my world and into Kelly’s. Sultry female vocals and vibrant percussion and guitar led me down the road to perdition and I was thrilled to be on the journey.
“Taking Time” or “Coffee” is a morning song that wakes you up as sure as its name. This piece should be my mantra! A writer’s life incarnate!  Somewhat familiar in the background melody, this song rockets up and gets you moving like a double shot of espresso. Deadlines, madness…and then the thought of a lover stops time and shifts things back into focus. Guitar swings out, Southern rock style and the warm pull of the percussion slides down my throat like my favorite salted caramel mocha and I smile. This song rocks.
“Tired” surrounds you with curling guitar riffs and smoking hot bass. Joplin style vocals growl from Kelly Z. bringing the listener right in the center of the action. Soul searing lyrics of loss and a want for love burn from the center of this song. Southern rock meets the blues and I didn’t want it to end.
“Take This Heart” has to be one of my favorites on the album. Kelly’s vocals ease their way into place with a steady percussion and guitar element. Morphing into a gritty performance of longing, I was enthralled. Every emotion comes through, screaming and loud. Guitar riffs flair and bend the piece into a complex weave of harmony and substance.
Live from Brussels is an album that illustrates the blues and rock styles of Kelly’s Lot. Known for their Americana roots rock style, this band is headed for great things. Internationally known and ready to step back into the studio, I am excited to see they are getting a horn section and will also be adding some keys to the mix. Five stars with flames and this band is worth every second. Earthy tones, vibrant percussion, rocking guitar and bass with vocals that will curl your toes…what more can you ask for? Kelly Z. and her crew are going on my bands to watch list and I eagerly await their next album.
5/5 Stars